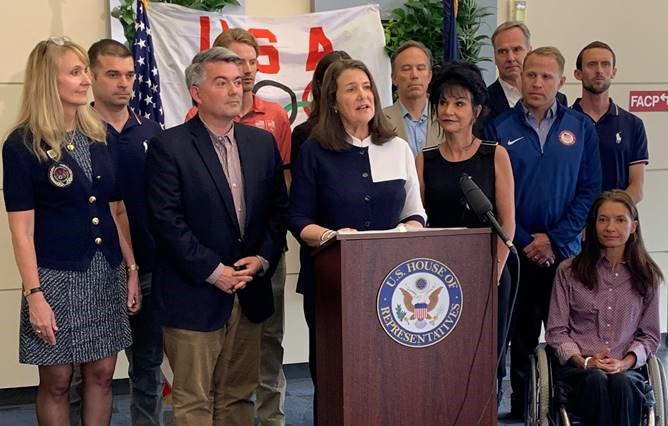 A 16-member commission would be established to oversee the operations of the United States Olympic Committee (USOC) as part of reforms proposed by the chairperson of the Congressional Sub-Committee investigating the body.

Congresswoman Diana DeGette, chair of the Energy and Commerce Committee’s Oversight and Investigations panel, unveiled the legislation prior to its introduction in the United States House of Representatives.

If it is approved, the panel will be created to examine how the USOC operates and produce a list of recommendations aimed at reforming its governance structure "to better protect the nation’s top athletes" within nine months.

The commission would include at least eight Olympians and Paralympians, while the top Democratic and Republican lawmakers in both the House and Senate would each appoint four members.

All members of the 16-person panel would be given subpoena power.

They will be asked to evaluate how responsive the national governing bodies of each Olympic sports are to its athletes following a backlash against the USOC for the way it handled the sexual abuse scandal in gymnastics.

It will also look into whether whether the U.S. Center for SafeSport has the funding and staff it needs to effectively respond to any future reports of harassment and sexual assault while assessing the diversity of the USOC’s Board members, its finances and whether it’s achieving its own stated goals.

"No amount of gold medals are worth putting the health and safety of our athletes at risk," said DeGette.

"When the very body that Congress created to care for our athletes becomes more concerned about winning, and protecting a brand, than the athletes themselves - it’s time for change."

The legislation has been supported by US Olympic and Paralympic athletes, as well as Judge Rosemarie Aquilina, who sentenced former USA Gymnastics doctor Nassar to up to 175 years in prison after being found guilty of systematic abuse of athletes in his care.

"This commission brings the voices who have been ignored to the table," said Aquilina.

"Athletes cannot thrive in a broken system that values money and medals over the safety of athletes."

In a statement, USOC spokesperson Mark Jones said: "We appreciate the efforts of Congress and will continue to work constructively with both the House and the Senate to create healthy and safe environments for the American athletes we serve."

The proposal comes after the "Strengthening U.S. Olympics Act" was introduced in the Senate in January following the release of a damning report in December by Ropes & Gray, a Boston law firm hired by the USOC to investigate the Nassar scandal.

The report concluded the USOC was among the organisations which facilitated Nassar's sexual abuse of hundreds of gymnasts and failed to act when the allegations against the disgraced doctor emerged.

The firm also accused former USOC chief executive Scott Blackmun and chief of sport performance Alan Ashley of being aware of the accusations over a year before they became public.

Ashley was sacked from his role after the report was released.

The USOC has vowed to reform in the wake of the Nassar scandal and chief executive Sarah Hirshland has begun to restructure the organisation.