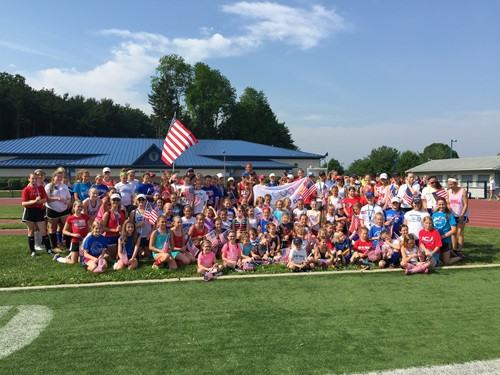 The United States Olympic Committee (USOC) is set to host more than 500 events in honour of 2019 Olympic Day, it has been announced.

The events will be held with the nationwide support of US athletes, National Governing Bodies (NGBs), multi-sport organisations, Major League Baseball (MLB) clubs and community groups.

They are scheduled in nearly 300 communities nationwide, with more than 200,000 people engaged in celebration of the Olympic and Paralympic Movements.

Held annually on June 23, Olympic Day commemorates the birth of the modern Olympic Games in 1894 and is celebrated by millions of people in more than 160 countries.

Its mission is to cultivate fitness, well-being, culture and education, while promoting the Olympic values of excellence, friendship and respect, as well as the three pillars of Olympic Day: move, learn and discover.

"In the same way the Olympic and Paralympic Games bring the world together every two years, Olympic Day gives all of us the opportunity to celebrate the joy of sport and Olympism every year," USOC chief executive Sarah Hirshland said.

"Seeing generations of Team USA athletes out in communities all over the country, sharing the Olympic values with the next generation of athletes and fans, truly speaks to the amazing power of Team USA and the Movement."

A dozen MLB teams will participate in Olympic Day by honouring US Olympians and Paralympians with a variety of on-field ceremonies, including ceremonial first pitches.

To begin celebrations throughout this week in Colorado Springs, approximately 30 children from the Boys and Girls Club of the Pikes Peak Region will be given a experience that will include an Olympic Training Center (OTC) cauldron lighting along with a VIP tour and sports demonstrations led by US athletes.

The week will conclude with an OTC Open House on June 23, when Colorado Springs residents will be invited to visit the OTC to meet US athletes, participate in sport demonstrations and tour various facilities.

The event is free and open to the public.

Olympic Day events in the US are heavily supported by members of the country's Olympic and Paralympic family.

More than 300 Olympic, Paralympic, Pan American and Parapan American athletes are attending events hosted by NGBs, while the US Olympians and Paralympians Association is hosting a virtual Olympic Day race.

Many member organisations are also joining the celebration, including Boy Scouts of America, Girl Scouts of the USA, Boys & Girls Clubs of America, California State Games, YMCA of USA and numerous BMX clubs.

More information on how to participate in Olympic Day celebrations in US communities can be found here.