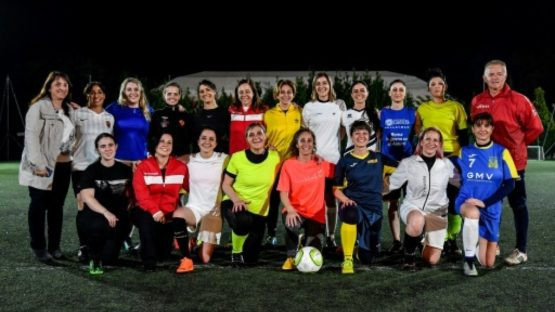 As the FIFA Women's World Cup draws international attention to women's football, the world's smallest country have played their first ever match – against one of Italian football's biggest names.

The Vatican City's women's team played their inaugural competitive match on May 26 against Serie A giants Roma.

Although the match, played over two 20-minute halves, resulted in "a double-figures defeat and a baptism of fire", according to AFP, it represents a significant milestone for a trailblazing women's team.

The Vatican City men's team played their first match in 1985, and their first international in 1994 with a 0-0 draw against San Marino.

Eight teams compete in its men's championship, which has run for nearly half a century – but there has never been an organised women's team or competition.

Now women are finally wearing the Vatican's colours of a yellow jersey and white shorts, bearing the keys of St. Peter and the papal tiara crest, on the football pitch.

"We thought the time was right to try to organise something, training and matches, also for women," said Danilo Zennaro, a representative of the Vatican department of culture and sport, to AFP.

A group of about 20 women – including Vatican employees, and workers from the Bambino Gesu pediatric hospital administered by the Holy See – meet every week to train on the grounds of the Pius XI sports centre in the shadow of St. Peter's Basilica.

The training kits are mismatched and the level of play variable, but serious effort is being made.

"We are a very heterogeneous group, there are young people aged about 25 and 50-year-olds," said 35-year-old Vatican employee Maura Turoli, who plays as a defender.

"It's wonderful to be on the pitch and see husbands and children waiting for us and supporting us on the other side of the fence."

Team-mate Floriana Di Iorio, who was already part of the women's team at the Bambino Gesu hospital, said the side "goes beyond sport" and wants to "spread a message of great openness".

She said: "The main objective is to convey a message of union, to be consistent, to keep our enthusiasm and perhaps also to be examples in places where the role of woman is still seen as a little marginal."

Team coach Gianfranco Guadagnoli also manages the men's team and works in the Vatican post office, but took on the challenge of organising the women's team.

Speaking before the match with Roma, he said: "We've just started this group, the first training session was one of pain, problems, but they are doing better than expected.

"We've never played a 11-a-side and on a big pitch, but Roma have come forward and, we will try, even if our means are not those of a Serie A team.

"It does not matter, we go with our qualities and whatever happens happens, without problems or dramas."

Undaunted by the Roma loss, the Vatican women are back in action in a tournament in Vienna later this month.