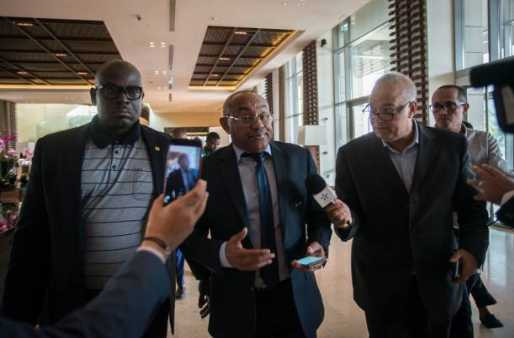 Ahmad was seized by officers from France's Central Office for Combating Corruption and Financial and Tax Crimes (OCLCIFF) at the luxury Hotel de Berri in Paris, where he was staying for the FIFA Congress.

He was questioned under a French procedure termed "free custody", which refers to him being interviewed in a slightly more comfortable environment than more traditional criminal interviews, but still under police custody,

Representatives for Ahmad claim his passport has been returned to him and that after attending the opening match of the FIFA Women's World Cup - between France and South Korea this evening - he will return to Egypt tomorrow.

However, Inside World Football reports he will have to remain in France under house arrest if the criminal investigation is still ongoing.

So far, no detail has arisen of criminal charges being brought against Ahmad, whose arrest came amid accusations he misused funds after cancelling a sports equipment contract with Puma in favour of an inflated deal with French company Tactical Steel, for the same equipment.

Tactical Steel, which is registered as a company in France and based in La Seyne-sur-Mer, is run by Romuald Seilier, a close friend of Loïc Gerand, Ahmad's personal attaché.

It is understood Sellier was also arrested and interviewed in Marseille.

The French authorities are believed to be investigating non-payment of taxes and criminal conspiracy to avoid tax duties.

To date it is estimated the French company has invoiced CAF almost $3 million (£2.3 million/€2,6 million) with a number of payments requested by Seilier to be routed through a Turkish company called Serin Hidrafat Ltd and its account with ING bank.

Already embroiled in allegations, Ahmad had appeared to seal a cost-effective arrangement before he cancelled the contract with Puma and instead opted to select the Tactical Steel deal.

Reuters also revealed that the documents allegedly disclosed that the African chief had instructed CAF Secretary General Amr Fahmy to pay $20,000 (£16,000/€18,000) in bribes into accounts of African Football Association Presidents.

CAF’s compliance officer allegedly claimed the expenses would be covered personally but they were in fact covered by CAF, a direct violation of the Confederation's financial regulations and article 136 of its disciplinary code.

The code states: "Anyone who offers promises or grants an unjustified advantage to a body of CAF, a match official, a player or an official on behalf of himself or a third party in an attempt to incite it or him to violate CAF Regulations will be sanctioned."

The news of Ahmad's arrest broke on the first day of FIFA President Gianni Infantino's second term after he was re-elected at the FIFA Congress.

Football's governing body released a statement yesterday claiming it is unaware of the details surrounding the investigation and would not comment on the specific case.

Inside World Football  has alleged that there is a growing belief within Ahmad's CAF Executive Committee that their President must stand down to allow them to prepare for its Africa Cup of Nations in Egypt, due to kickoff on June 21.

In February, former President of the Liberian Football Association, Musa Bility, resigned from senior roles at CAF in protest at how Ahmad was leading the governing body.

Bility was in Paris for the FIFA Congress and has called for a forensic audit of CAF's finances in the wake of Ahmad's arrest.

He reportedly told Inside World Football there were too many unanswered questions concerning the management of CAF's finances.

Billity urged Ahmad to show transparency and commission an independent financial audit into all of the Confederation's operations following his release from custody.