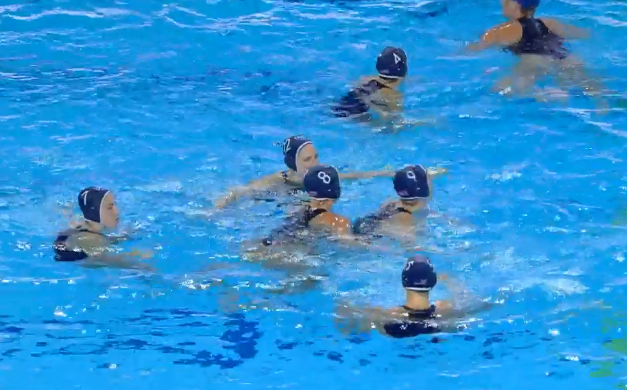 Having won all three of their group games while China has lost theirs, this always looked like being a complete mismatch, and so it proved as the US won 21-6 at the Danube Arena.

Five unanswered goals to start the game set the tone, and the US led 6-1 after the first quarter.

There was no let up from there, with the Americans leading 12-2 by half time and 17-3 by the end of the third quarter.

The winner of this competition qualifies automatically for next year's Olympic Games in Tokyo, and the US - who have named a stronger squad than usual for the Super Final - very much mean business.

Italy, who topped Group A with three wins from three, eventually saw off Canada, who lost all their Group B games, but not before being made to work hard and being pegged back on a number of occasions on their way to a 14-10 victory.

The Italians raced into a 3-0 first quarter lead, Arianna Garibotti scoring either side of a Roberta Bianconi goal.

The Canadians pulled it back level in a mad opening eight minutes - Axelle Grevier making it 3-3 with a cheeky lobbed finish into the far corner - and went ahead in the second quarter through Emma Wright's finish.

It was not long before the Italians had restored their lead - Silvia Avegno pulled them level before Garibotti made it three goals from three shots for 5-4.

From there, Italy were gradually able to extend their advantage, reaching 11-7 by the end of the third quarter and keeping the Canadians at arm's length until the close.

The Netherlands are also through to the semi-finals after defeating gallant hosts Hungary 12-10 in front of a partisan crowd.

The Dutch were surprise second place finishers in Group A after losing to Italy, and went 2-0 down in the early stages, before Hungary's Krisztina Garda missed a penalty that would have given them a three-goal cushion.

This switched the momentum, with Netherlands drawing level by the buzzer and going 6-3 up by half-time.

Hungary got back to within a goal of the Dutch on a couple of occasions in the final two quarters, but could never overturn the European champions and so bow out of the main competition on home water in the quarter-final stage.

The first quarter-final produced a titanic tussle where Russia narrowly prevailed, holding off an Australia fightback to win 9-8 in a topsy-turvy encounter.

Russia led 3-1 at the end of the first quarter, a saved penalty by Russia goalkeeper Anna Karnaukh proving decisive.

Australia recovered and went 4-3 ahead in the second quarter, though Tatiana Tolkunova scored from distance on the buzzer to ensure the sides went into half-time level.

It set Russia on a run of four unanswered goals to put them in command, and though Australia tried to rally, a penalty from Ekaterina Prokofyeva with less than five minutes to go made it 9-6 and seemed to ensure the result was in the bag.

Australia called a time-out and regrouped, scoring twice more late on to ensure a grandstand finish, however Russia held on.