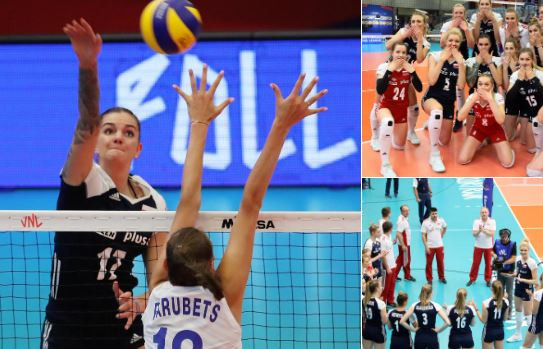 Italy lost ground at the top of the round robin in the International Volleyball Federation (FIVB) Women’s Nations League after losing their first match in the third week‘s series of preliminary matches.

The Italians were beaten 3-2 by Olympic champions China in their third and final Pool 9 match at Hong Kong Coliseum.

The other Pool 9 match today saw Japan beat the Netherlands 3-0.

This is nothing new for Paola Egonu, but the Italian 🇮🇹 scoring machine scored a whopping 40 points against China 🇨🇳. She is now #2 on the #VNLWomen Best Scorer List.

Turkey maintained their lead as they won their third and final Pool 11 match at Bangkok’s Indoor Stadium Huamark 3-0 against Thailand.

Turkey will thus go into next week’s fourth round of matches with an 8-1 record.

In the other Pool 11 match of the day, the Dominican Republic beat Bulgaria 3-1.

Poland kept themselves in the mix as they concluded week three with a 7-2 record thanks to a 3-2 win over Russia in Pool 12 at Lange Munte in Kortrijk in Belgium.

Defending champions the United States missed out on the chance to match Turkey's 8-1 record when they were beaten in their final Pool 10 match.

The US succumbed 3-1 against Brazil at Pinnacle Bank Arena in Lincoln, Nebraska.