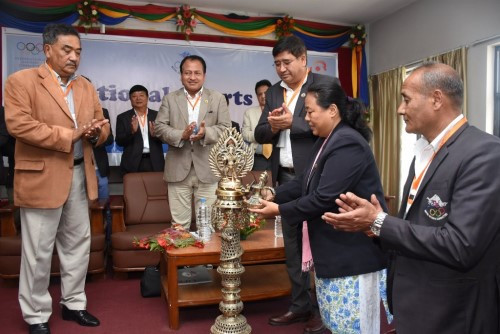 The Nepal Olympic Committee (NOC) have called for closer ties with the country's Sports Council at their second National Sports Forum.

The Forum was held in Kathmandu as Nepal look to prepare ahead of next year's Olympic Games in Tokyo.

The country is also due to host the 13th South Asian Games this year from December 1 to 10.

Honorary President of the NOC, Dhurba Bahadur Pradhan, said a better and closer relationship between the country’s Committee and Council would benefit athletes as they aim to win their first ever Olympic medal.

The President of the NOC, Jeevan Ram Shrestha, also spoke and stressed the Forum would be a useful platform for the Nepalese sports associations to exchange knowledge and ideas.

Nepal have entered every Summer Olympics since Tokyo 1964 - with the exception of Mexico City 1968 - but are yet to get on the podium.

The Forum was attended by various representatives of national governing bodies, as well as NOC Executive Board and Commission members, as well as President of the Nepalese Parliamentary Education and Health Committee, Jaypuri Gharti.

Other topics discussed were an update on preparations for the 13th South Asian Games, sports and media, sexual harassment in sport, and combating doping.