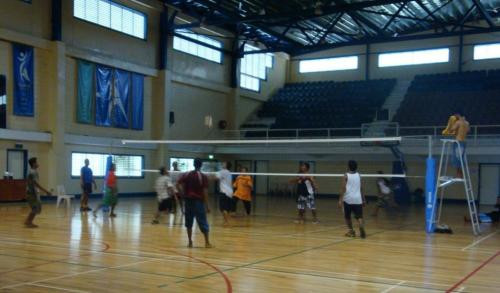 Preparations for the volleyball tournament at this year's Pacific Games are being scrutinised at a test event held by Samoa 2019 in Apia.

The six-day competition began on Friday (May 24) and features 10 men's and women's teams.

It gives organisers the chance to assess the venue which will host the volleyball tournaments, Gym 2 at Faleata Sports Complex.

"I have seen that every country around the world has their own way that they do things," said Samoa 2019 volleyball technical delegate Dean Turner.

"I am at the point where I go into a country and do not expect anything, more often you just get surprised.

"I have seen some of the games today and the standard is higher than I expected.

"I was watching the referee and he was comfortable."

Turner also praised the work of the Volleyball Samoa Federation in their preparations for the Pacific Games.

"We have been talking with the team in Samoa for the past couple of weeks about things that we need to organise, like athlete entries.

"You can’t have done more to be prepared."

The volleyball event at the Pacific Games starts on July 11 and concludes on the day of the Closing Ceremony on July 20.

The Games in Apia begin on July 7.