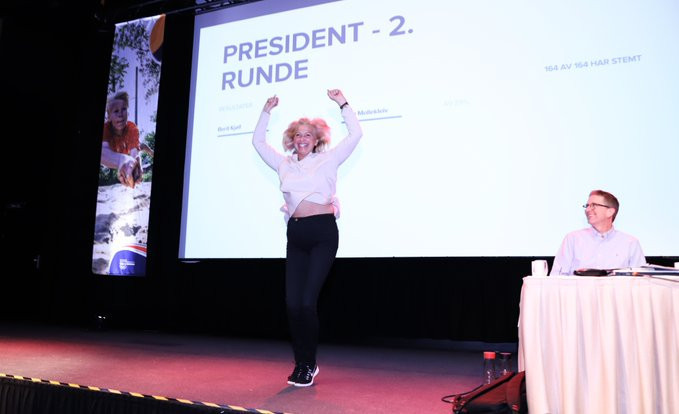 Berit Kjøll pulled off a stunning two-vote victory as she was elected President of the Norwegian Olympic and Paralympic Committee and Confederation of Sports (NIF) at its General Assembly in Lillehammer.

The Huawei Norway chief executive claimed 50.61 per cent of the votes in the second round to beat favourite Sven Mollekleiv by the narrowest of margins.

Mollekleiv, the preferred candidate of the NIF Nominations Committee, received 49.39 per cent.

The result of the election would have been determined by the drawing of lots had the former Norwegian Red Cross President earned one more vote.

Incumbent Tom Tvedt bowed out of the contest after the first round with 14 per cent.

Tvedt, elected in 2015, was not expected to retain his position owing to an expenses scandal within the NIF.

The 51-year-old's departure from the race left a straight battle between Kjøll and Mollekleiv for the top job in Norwegian sport.

Kjøll was given 41 per cent in the first round, while Mollekleiv claimed 45 per cent – more than five per cent shy of the required majority.

Anne Irene Myhr, President of the Nominations Committee, had outlined the panel's reasoning for putting Mollekleiv forward as their candidate.

"We consider him the most unifying leader for Norwegian sports," she said.

The 164 voting members declined to heed her calls to select Mollekleiv and instead the General Assembly chose Kjøll, an experienced businesswoman who served as chairperson of the Norwegian Tourist Association from 2012 to 2018.

The 63-year-old will be tasked with building on the success of the Norwegian team at major events and could also spearhead discussions over a possible bid for a future Winter Olympic Games during her four-year term.

"I am both touched and happy," she said.

"I am so much looking forward to working with all the great people in the sports movement."