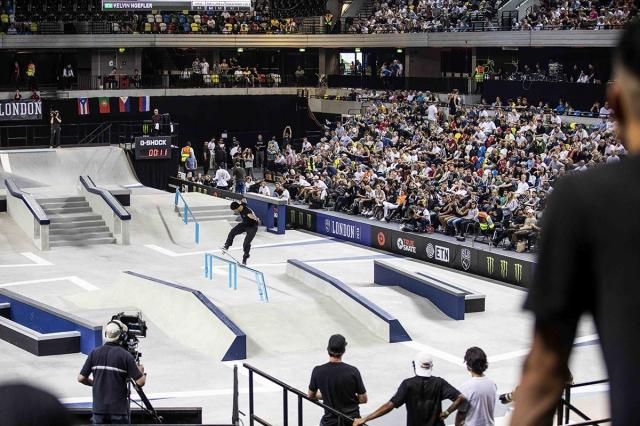 After a Global Open qualifying competition that took place earlier this week in the BAYSIXTY6 skatepark, 12 women and 10 men have shifted across the capital to the London 2012 Games site, where they will join fields of higher-ranked athletes in targeting places at Tokyo 2020, where the sport will make its Games debut.

Japan’s Sora Shirai topped men’s qualifying ahead the US pair of Alex Midler and Jagger Eaton.

All will now join a showpiece weekend of action that is due to involve the top three from last year’s World Championships in Nanjing.

Huston took his third gold in China ahead of the Brazilian pair of Kelvin Hoefler and Felipe Gustavo.

Here the skaters competing during the weekend in the Copper Box Arena in London for the first stop of @worldskatesb @StreetLeague.
Tickets still available on https://t.co/Te705YoXMA
Live stream coverage on https://t.co/Qx8KfQIghG on Sunday May 26 starting a 11 (London Time) pic.twitter.com/NbvDYbkTHo

The highest three women’s finishers from the Worlds were Nishimura, Brazil’s Leticia Bufoni and Lacey Baker of the United States.

The top 12 women from the Global Open Qualifier advance to tomorrow’s semi-finals and meet the top 18 skaters from the 2018 World Skate SLS World Championship, with the top eight going through to Sunday’s final.

The top 10 men from the Global Open Qualifier advance into tomorrow’s quarter-finals to meet the skaters ranked from 21st to 38th in the 2018 World Championship and the best four skaters, not already pre-seeded, from the SLS Ranking prior to the last World Championship.

From the quarter-finals, the top 10 men advance to Sunday’s semi-finals to meet the top 20 men from the 2018 World Skate SLS World Championship, with eight skaters going forward to the evening’s final.

A total of 164 athletes from 45 national teams took part in the first stages of the Global Open qualifier formula, which is intended to offer skaters the chance to access the historical Street League tour and to compete at the highest level in street skateboarding.

Skateboarding is one of five additional sports included for Tokyo 2020, along with baseball/softball, karate, sport climbing and surfing.

Skateboarding was last week dropped from this year’s Pan American Games in Lima after the Panam Sports Executive Committee claimed World Skate and the Pan American Confederation of Roller Sports had not fulfilled their requirements.