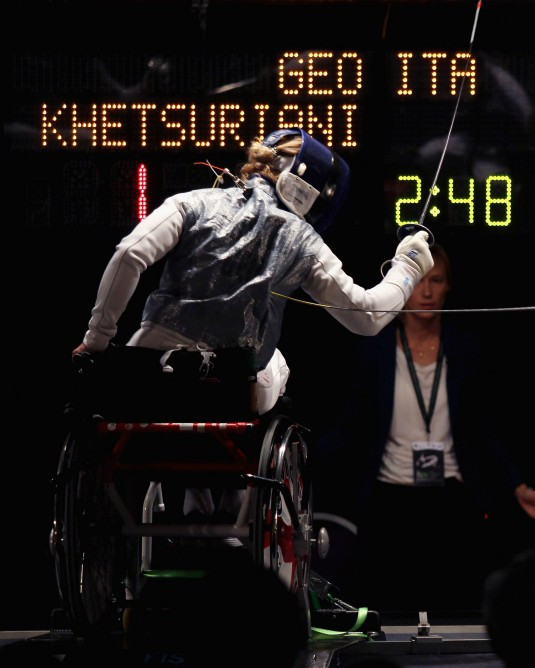 World champion Irma Khetsuriani recorded a fifth victory in as many appearances on the International Wheelchair and Amputee Sports Federation Wheelchair Fencing World Cup circuit as she claimed the women's sabre B honours in São Paulo.

The Georgian defeated Saysunee Jana of Thailand in the final at Brazil Paralympic Training Centre on day two of the competition.

It means she has continued her strong form heading into this year's World Championships in Cheongju in South Korea in September.

The two bronze medals in the category were awarded to Olena Fedota of Ukraine and Boglarka Mezo of Hungary.

Jana's medal was her second of the event as she won gold in the women's épée B on day one yesterday.

With 120 athletes from 20 countries gathered in São Paulo, the competition is seen as an important stop en route to the Tokyo 2020 Paralympics.

Three other divisions were held today with Yeveheniia Breus winning an all-Ukrainian final to scoop gold in the women's sabre A.

She upset the rankings by beating team-mate and world number one Nataliia Morkvych in the final.

Nino Tibiashvili of Georgia and Amarilla Veres of Hungary won bronze, but Poland's Kinga Drozdz had to make do with eighth after winning at the last World Cup in Pisa.

In men's action, Britain's world champion Dimitri Coutya captured gold in the men's épée B to add to his title in the men's foil B from yesterday.

He saw off Ukraine's Oleg Naumenko in the final as Brazil's Americas champion Jovane Guissone had to settle for one of the bronze medals on home soil.

Alexander Kusyukov of Russia also shared the third step of the podium.

He defeated Maxim Shaburov of Russia in the final, with bronze medals going to Andrii Demhchuk of Ukraine and another Russian in Nikita Nagaev.

The last individual action of the World Cup will take place tomorrow.

Men will be in action in the épée A and sabre B categories with women contesting the foil A and B events.

Team competitions will then conclude the World Cup on Saturday (May 26).