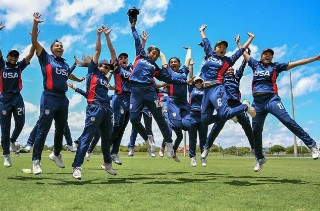 The US secured their second consecutive win over Canada at the International Cricket Council Women's Qualifier Americas at Central Broward Regional Park in Fort Lauderdale.

Following their 10-wicket triumph yesterday, the US were made to work harder for their victory today as they overcame their Canadian opponents by 37 runs.

Canada, needing to win the match to keep their qualification hopes alive, won the toss and elected to field first.

They made an early breakthrough with the dismissal of Erica Rendler but her opening partner Sugetha Chandhrasekar steadied the ship alongside Sindhu Sriharsha.

Watch the joyous celebrations from #TeamUSA🇺🇲 Women as we sealed qualification from the @ICC Americas Women's Qualifier pic.twitter.com/DBT5BzfC11

Chandhrasekar hit 32, while Sriharsha top-scored with 38 as the US posted 113-6 from their 20 overs.

Chasing 114 to win, Canada lost opener Monali Patel and Miryam Khokhar in quick succession as the US took control of the match.

Uzma Iftikhar led the way with the ball, taking 4-19 as Canada were bowled out for 76.

The US will join Bangladesh, Ireland, Scotland, Papua New Guinea, Thailand and Zimbabwe at the T20 World Cup qualifier in Scotland in August and have also secured a spot at next year's Women’s Cricket World Cup Qualifier.