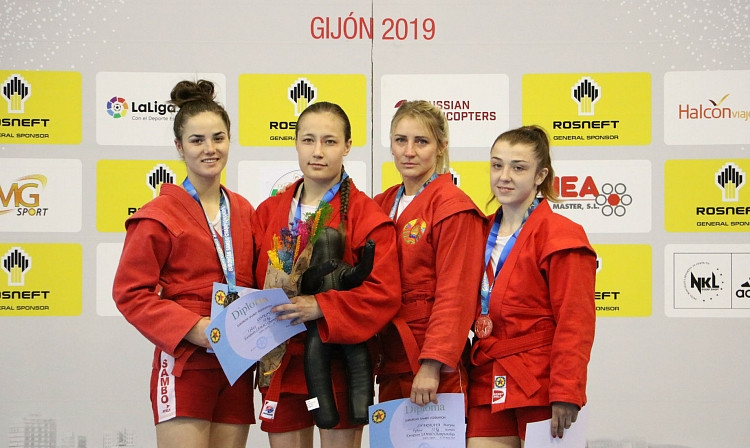 Russia claimed another six gold medals at the European Sambo Championships as the nation further underlined its dominance of the sport in Gijón.

The Russian team matched the performance of the first day of action as they extended to 12 their haul of titles at Palacio de Deportes de Gijón.

Vera Lotkova was the sole Russian victor in the three women's categories as she beat Paulina Esanu of Moldova in the final of the women's 52 kilograms division.

Tatsiana Matsko of Belarus denied Russia another gold medal in the 64kg category by defeating Valeriya Anisimova, while Halyna Kovalska claimed 80kg honours with a win over Nino Odzelashvili of Georgia.

Russia then clinched all three titles on offer in the men's weight classes today.

Vladimir Gladkikh proved too strong for Grigor Mkhitaryan of Armenia in the 57kg final, before Maxim Yudin ousted Stsiapan Papou of Belarus at 74kg.

It was a similar story in the combat sambo divisions, contested by men only, as Fedor Durymanov despatched Andrii Kucherenko of Ukraine in the 62kg gold medal bout.

Ukraine's Vladyslav Rudniev briefly halted the Russian charge with victory over Yauheni Aleksiyevich of Belarus in the 82kg final.

Kirill Sidelnikov ensured a fitting ending to the day's action as he beat Vitalii Hrebeniuk of Ukraine at over 100kg.