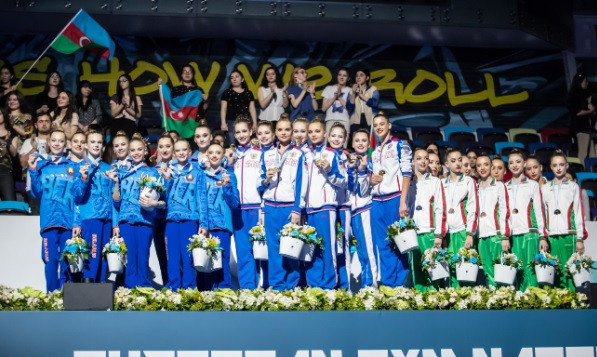 Russia secured the team title with another dominant performance as the first medals were awarded at the Rhythmic Gymnastics European Championships in Baku.

The bronze medal was earned by the Bulgarian trio of Boryana Kaleyn, Katrin Taseva and Neviana Vladinova, who scored 202.075.

Russia also won the other gold on offer today as their junior group scooped the all-around honours with a tally of 44.925.

The Averina sisters dominated the individual apparatus qualifying and will both hope to add to their hauls when the finals are held tomorrow.

Soldatova qualified top in the ribbon after her routine yielded 20.325, with Dina Averina in second on 20.200.

Dina Averina booked her place in the clubs final in style having scored 23.875, while her sister Arina qualified second with a score of 22.300.