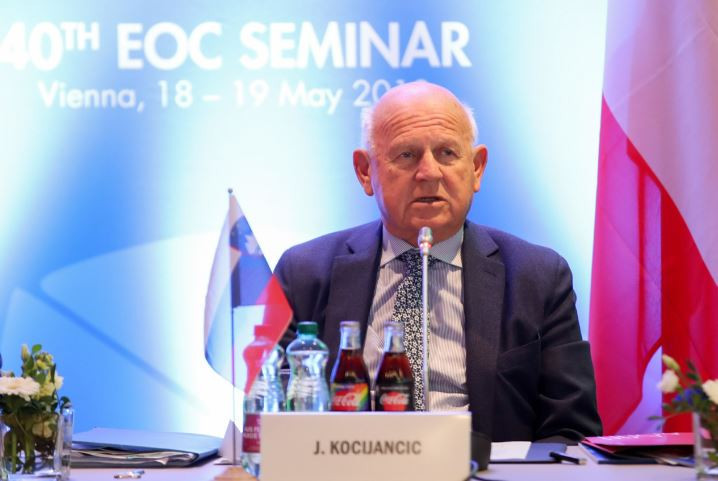 European Olympic Committees President Janez Kocijančič reiterated his confidence that the hosts for the 2023 European Games would be confirmed shortly before the Opening Ceremony of this year’s Games in Minsk – in good time for the traditional Closing Ceremony handover.

“Our intention is to make it possible that the flag will go from one hand to the other,” he told insidethegames shortly after emerging from a three-and-a-half hour meeting of the Executive Committee here.

As insidethegames reported earlier this week,  Kraków has replaced Katowice as Poland's candidate to host the 2023 Games, with Kazan in Russia being the other named runner.

“We have two cities which are very far in their candidacies,” Kocijančič said.

“There are some formalities which have to be fulfilled.

“These are formalities which are outside the Olympic Movement because we have, I would say, full determination of the National Olympic Committees of both countries.

“It is up to the Governments and authorities to accept all the conditions and guarantees.

“I still think it is possible that we will have everything in place and that we will select the organiser at our Extraordinary General Assembly which will be held before the Minsk European Games.

“I have spoken with the city authorities, with the mayor of Kraków, with the Marshal of the province – they just need the guarantee of the Government.

“The problem right now is that everyone is full of elections – European elections and their national elections which are happening soon.

“In Russia they have I think everything settled except for a formal decision from the federal Government.

“But they are pretty far along and they are determined to run for it."

The meeting involved further discussion about the best ways to define and safeguard the European sports model which is at the heart of Olympic sport and which has come under increasing pressure from commercial sporting offshoots in recent years.

"First of all – the model is not very well defined – especially at the edges where it meets commercial sport.

“We have to make a lot of further work.

“What complicates this issue is the fact that in Europe we have 50 different countries with 50 different systems.

“We decided we would like to have very open dialogue with European institutions and national Governments about this subject.”

Niels Nygaard, the EOC vice-president, underlined to the meeting the importance of safeguarding the European Sports Model.

“It’s an international issue,” he said, adding: “The IOC and all NOCs operate under our European Sports Model.

“What we are doing here in Europe is therefore very important globally."

Meanwhile Brno, in the Czech Republic, has made an application to host the 2025 European Summer Youth Olympics (EYOF).

Banska Bystrica in Slovakia is set to be confirmed at tomorrow’s Seminar as hosts of the 2021 European Summer Youth Olympics.

The 2023 EYOF has already been allocated to Koper in Slovenia.