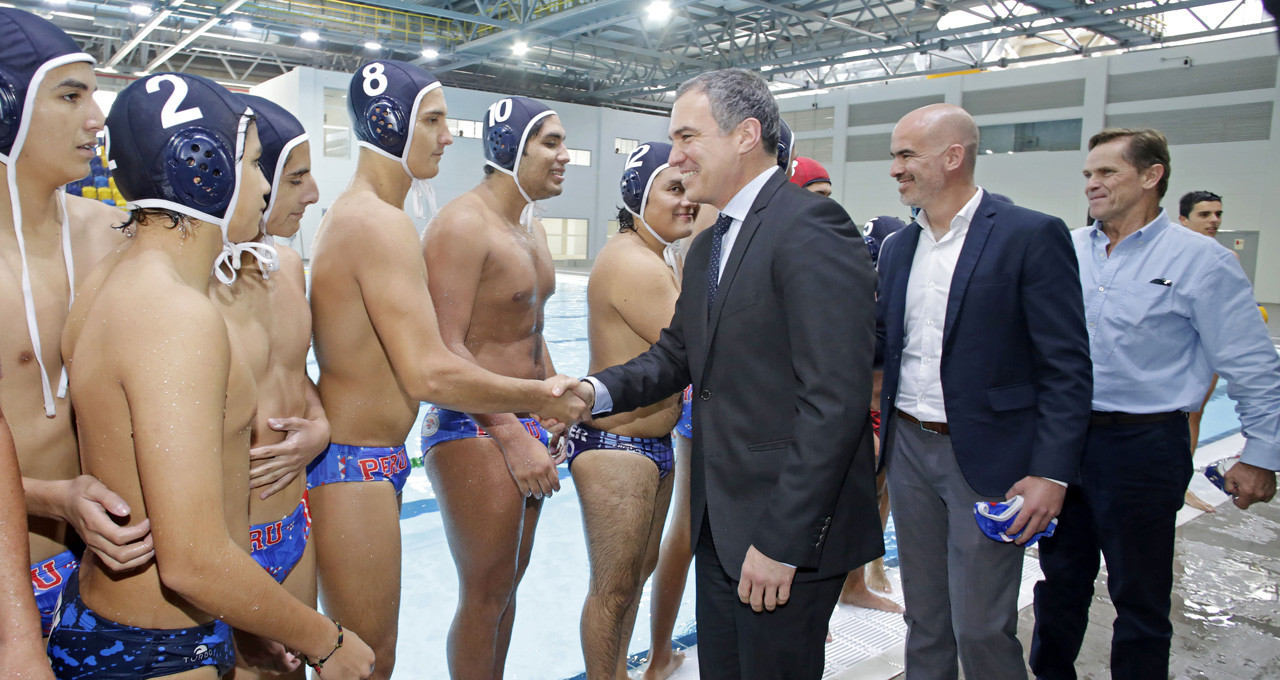 The delivery of the water polo venue marks an important milestone for the organisers of this year’s Pan American and Parapan American Games as Villa María del Triunfo has become the first site to be ready, in its entirety, for the multi-sport event.

Lima 2019 President Carlos Neuhaus was also at the ceremony.

Also present were Sebastián Suito, the head of the Peruvian Institute of Sports, and Eduardo Tabini, the President of the PSF, as well as members of the Peruvian water polo team.

"It is a very special honour to be in this venue, representing the Government, to celebrate the planned success and teamwork," Del Solar said.

"Following the Games was a brave, bold decision and, thanks to the leadership of Carlos Neuhaus, the organisation is now an example of how to face challenges.

"Peru can now count on the facilities of Villa María del Triunfo, with a legacy in infrastructure, which will be an element of transformation for the country.

"The real legacy is not going to be the courts, but the enormous number of young people who make the sport the experience of their life."

Del Solar, a former representative of Peru's national water polo team, added: "Personally, having the privilege of being near a pool, like 30 years ago when I participated in a South American Championship, I feel that I can still enter and compete.

"It is an exciting and special moment as well as seeing so many friends with whom I shared it with.

"Lima 2019 is the biggest event the country has ever organised, so, thank you for the invitation and for continuing to grow water polo."

Neuhaus said all the work that has been done is the product of a strong effort but insisted Lima 2019 organisers will not be resting on their laurels.

"We have work ahead, which will be intense," he added.

"We still need to make a good Games.

"Before, it (the aim) was to comply with the infrastructure and we are achieving it.

"Now our challenge is to make a quality Games, the best Pan American Games in history."

Another venue recently delivered by Lima 2019 was the Softball Stadium, also located in the Villa María del Triunfo Sports Center.

Members of the Peruvian men’s team trained in the new venue, while children from three different schools of Villa María del Triunfo attended as spectators.

"It’s a great pleasure for Lima 2019 to participate in this event," Funcke said.

"All softball fans had a smile on their faces.

"Hopefully this sport will grow quickly and it will help young people from nearby communities, such as the children who attended the event, to get closer to softball."

Endo was thankful for the modern venue.

"We've been struggling for 10 years," she said.

"Our teams had to train in inadequate conditions and several times at their own cost, exposing themselves to crime.

"But, despite all this, we always competed.

"Imagine where we’d be in the world ranking if we had this stadium."

They will be followed by the Parapan American Games from August 23 to September 1.