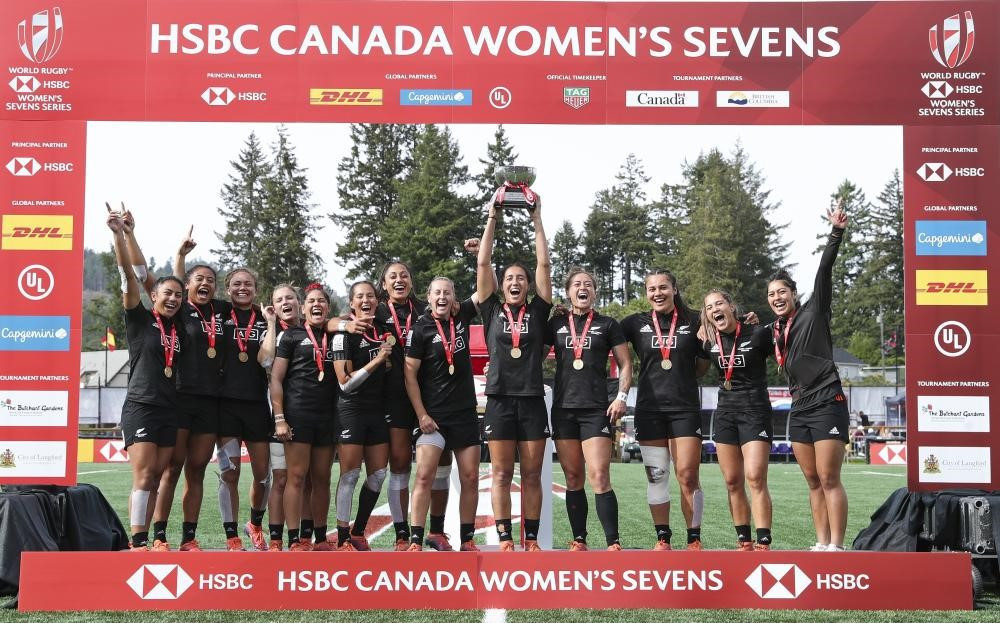 New Zealand won the World Rugby Women's Sevens Series event in Canada for the third time in a row after a hard-fought 21-17 victory over Australia in the final at Langford’s Westhills Stadium today.

The victory means the Black Ferns Sevens had two reasons to celebrate as by reaching the semi-finals they had confirmed their place at the Tokyo 2020 Olympic Games via a top-four finish in the overall standings.

Their 17-7 victory over Spain gave them an unassailable lead over fifth-place France with one round remaining.

New Zealand now lead the standings with 92 points after their fourth title in five rounds, followed by the United States with 80, Canada with 78, Australia with 74 and France with 60.

Australia versus New Zealand has been the most common final on the Women's Sevens Series with this the 15th occurrence in 36 tournaments.

But it was in complete contrast to last year’s final when New Zealand blew Australia away with a sublime display of attacking rugby to win 46-0.

Australia have not beaten New Zealand since the Sydney final in 2018, but they opened the scoring when Ellia Green got away from Michaela Blyde and the covering Tyla Nathan-Wong to score in the left corner.

New Zealand hit back when teenager Dhys Faleafaga shrugged off a tackle and flicked a pass over her shoulder to her captain Sarah Hirini, who coasted over with little resistance.

Their second try was similar with Nathan-Wong drawing Charlotte Caslick before offloading to Niall Williams to cut through the gap and run under the posts for a 14-5 lead with a minute to play in the first half.

That was enough time, though, for Australia to respond as Alicia Quirk and Caslick combined well down the left before the latter had Emma Tonegato in support to finish off the move and cut to four the deficit at the break.

New Zealand increased that lead when Hirini offloaded to Nathan-Wong, who handed off Emma Sykes to run under the posts to give herself an easy conversion.

But Australia kept pushing for a way back into the game with Green intercepting Williams' long pass to grab her second of the final with barely 30 seconds to go.

The restart was judged to have been knocked forward, though, and from the resulting scrum Kelly Brazier kicked the ball out to cue the celebrations.

They wouldn't be the @BlackFerns if we didn't see a celebratory Haka!

"That was a tough final, we knew it was going to be tough coming up against Australia,"  said Nathan-Wong.

"Both teams came out hot, we worked hard and I’m proud of the girls for executing our game plan, working hard for each other and leaving it all out there.

"Last year we put a pretty high score on Australia and we knew they wouldn’t let us get away with it again and they didn’t, so credit to them for really working us.

"They scored some pretty good and long-range tries but full credit to our girls for hanging tough until the very end.

"It’s pretty fantastic to know that we’ve qualified our country for the Olympics especially as there’s only one tournament left.

"We’re going to want to work hard over these next few weeks, build towards our last tournament in France and, hopefully, put on another good show."

Australia captain Sharni Williams added: "It was difficult but we gave everything we had.

"We haven’t made a final since Sydney so that was good confidence for us.

"We were a lot more physical than we have ever been and I’m very proud of the girls."

New Zealand defeated the US 26-12 in the semi-finals, while Australia overcame France 26-19 in the other last-four encounter.

Fiji triumphed 26-19 over China to not only win the Challenge Trophy for the third Women's Sevens Series event in a row but also to increase to four points their advantage over their opponents in the battle to avoid relegation.

The final tournament on the Women's Sevens Series is due to take place in Biarritz on June 15 and 16.