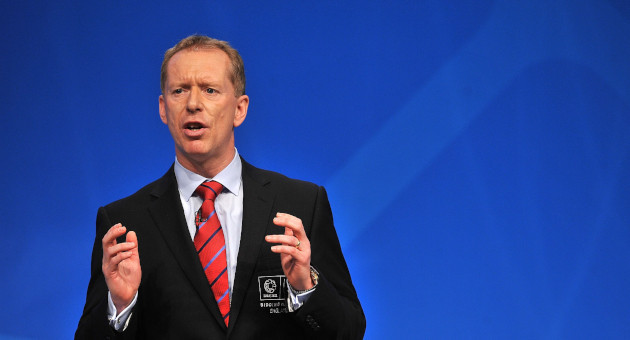 Anson joins the BOA following the departure of former chief executive Bill Sweeney to take up a similar role at the Rugby Football Union (RFU).

No start date has yet been agreed for the 54-year-old, although it is anticipated this will be in the autumn of 2019.

Anson joins from Goals Soccer Centres, where he has been chief executive, and brings with him considerable sports experience having worked in football and tennis, for Manchester United and the Association of Tennis Professionals, as well as for leading sports retail and marketing organisations.

With the BOA being independently funded to fulfil its objectives of taking athletes to the Olympic Games, it is claimed Anson brings a "wealth of commercial and marketing experience to support Team GB maintaining and growing its status as the nation’s most-loved sports team".

With little more than a year to go before Tokyo 2020, Anson is said to be joining with considerable knowledge of the BOA and the Olympic Movement.

He has served as an unpaid independent non-executive director of the BOA since 2011, during which time the organisation has enjoyed excellent performances at both the summer and winter editions of the Olympics.

"Andy is a very high-grade individual who has a unique combination of sports experience and commercial expertise," said Sir Hugh Robertson, chair of the BOA.

"We are delighted to have him on board to lead Team GB into Tokyo 2020 and beyond."

Anson added: "I have been fortunate to enjoy a rewarding career across different aspects of the sports industry over many years, but the BOA is an organisation close to my heart and I am extremely motivated to play a role in the future of the organisation on behalf of the athletes and the member national governing bodies.

"With Tokyo 2020 on the horizon, I believe the BOA and Team GB has an exciting future ahead and I am delighted to be asked to lead a team of talented and dedicated professionals to ensure we give the athletes and sports every chance to succeed on sport’s biggest stage."

The 2018 FIFA World Cup went to Russia ahead of England and joint bids by the Netherlands and Belgium, and Spain and Portugal.

A report into the bidding process was critical of England's effort with the Football Association's relationship with former FIFA vice-president Jack Warner highlighted.

Warner, also the former President of the Confederation of North, Central American and Caribbean Association Football, is among those embroiled in the widespread FIFA corruption scandal and has been indicted on corruption charges by the United States Department of Justice.

It was announced in February that Sweeney was leaving his position as BOA chief executive after nearly five and a half years to join the RFU.

Sweeney arrived at the BOA in November 2013 and oversaw Great Britain’s performances at the Sochi 2014, Rio 2016 and Pyeongchang 2018 Olympics.

He came in having worked as a sports business executive for more than 25 years, including at Adidas, but has now moved to the governing body of rugby in England.

In a statement, Sir Hugh said he was "disappointed" to lose Sweeney, "especially at this stage of the Tokyo 2020 cycle".