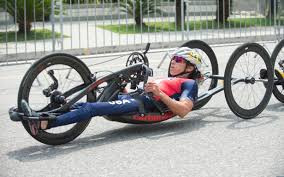 Dana had already taken gold in the women’s H3 time trial, today earning another victory in the H3 road race.

She won the 36.4 kilometre race in 1hr 30mins 14secs, with Italy's Francesca Porcellato five minutes and 59 seconds behind her.

Jennette Jansen of the Netherlands also claimed her second gold in the women's H4 road race.