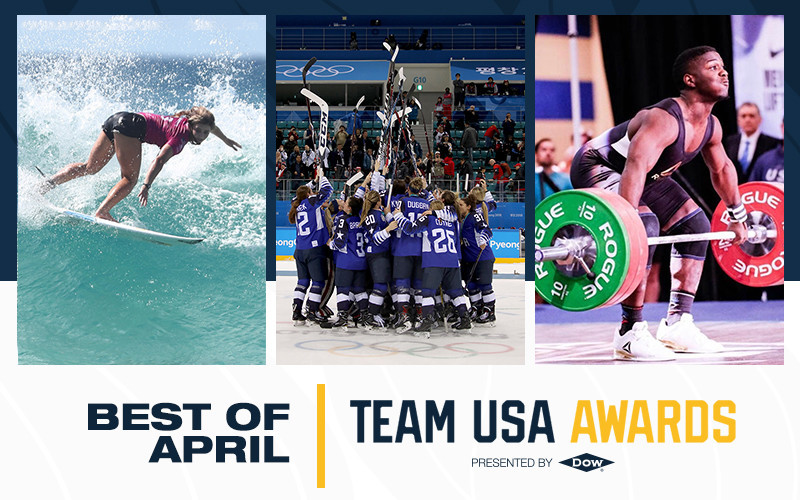 The United States Olympic Committee (USOC) has announced that weightlifter CJ Cummings, surfer Caroline Marks and the US women’s ice hockey team have earned Best of April honours for the Team USA Awards.

The 18-year-old went a perfect six for six in his attempts, managing meet-bests of 153kg and 191kg in the snatch and clean and jerk respectively.

His total of 344kg was enough to crown him Pan American champion and he was named the best male lifter of the competition.

The youngest surfer in the WSL at 17-years-old, she used her powerful backhand to collect 13.83 points and outscore three-time world champion Carissa Moore of the US in the final.

Marks, named the WSL Rookie of the Year in 2018, now has seven heat wins in her second WSL season, averaging a heat score of 12.41 points.

The US women’s ice hockey team went undefeated to claim its fifth consecutive gold medal at the Women’s World Championship in Espoo, beating hosts Finland 2-1 in a shoot-out in the final.

History slipped in and out of Finland’s grasp as what appeared to be an overtime goal that earned them victory over the US, the Olympic champions, was disallowed.

The home side believed they had done the impossible and won the title in their first global final with a golden goal from Petra Nieminen with less than eight-and-a-half minutes of overtime remaining.

But officials ruled the effort out for goalie interference after a lengthy video review.

The US won its seven games throughout the tournament by a combined score of 41-5, while the combined efforts of goaltenders Alex Rigsby and Maddie Rooney secured the programme’s second-longest shutout streak in tournament history - 5 hours 16min 35sec.

Each national governing body may nominate one female, one male and one team per discipline for the Team USA Awards.

Votes received from national governing body representatives and select members of the media account for 50 per cent of the final tally.