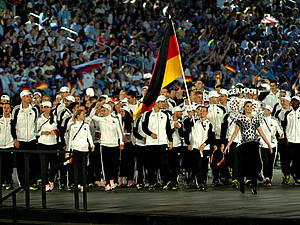 The German Olympic Sports Confederation (DOSB) has nominated its team for the European Games in Minsk with up to 150 athletes set to travel to Belarus’ capital next month.

For the time being, the DOSB has nominated 162 athletes in 13 sports for the second edition of the multi-sport event.

The national associations of badminton, canoeing and table tennis have proposed a pool of participants from which they will select the starters for Minsk 2019 by May 20, the deadline for when the names of athletes must be officially reported.

Among the most notable athletes set to compete for Germany are table tennis players Timo Boll and Dimitrij Ovtcharov, the former a three-time Olympic medallist and the latter a men’s singles gold medallist at the inaugural European Games in Azerbaijan’s capital Baku in 2015.

The team of canoeists is led by Rio 2016 Olympic gold medallists Sebastian Brendel and Max Hoff, both of whom were victorious at Baku 2015.

Others hoping to make their mark will be archer Lisa Unruh, the Rio 2016 Olympic silver medallist, as well as shooters Christian Reitz and Monika Karsch.

Reitz is the reigning Olympic champion in the men’s 25 metres rapid fire pistol event, while Karsch was the Rio 2016 silver medallist in the women’s 25m pistol.

Four of those include qualifying competitions for the Tokyo 2020 Olympic Games – archery, karate, shooting and table tennis.

In athletics, badminton, road cycling and judo, world ranking points can be earned with those counting towards Olympic qualification.

"The European Games are a springboard to Tokyo for Team Germany," said Uschi Schmitz, Germany's Chef de Mission for Minsk 2019 and the DOSB's vice-president of competitive sports.

"Our athletes are highly motivated, especially where quota places or leaderboard points for qualifying for the 2020 Summer Olympics are there to be won.

"We especially welcome the pleasing fact that the German sports fans can follow the competitions on free TV and that the achievements of our athletes are receiving so much public attention.

"The European Games will be broadcast live on Sport1."

Veronika Rücker, DOSB's chief executive, said: "For Team Germany and thus for European Games Team D as well, the values and the Olympic spirit are high on the list.

"Of course we want success, athletes want that, but not at any price.

"We also care about the fair and sympathetic appearance of Team Germany."

The German team will also feature 98 supervisors, as decided by the DOSB Board on the suggestion of national associations.

Prerequisites of a nomination to the team are the signing of the DOSB athlete agreement and a review by the German National Anti-Doping Agency (NADA) over whether rule violations exist against current regulations.

Between the date of nomination and the start of the European Games, due to run from June 21 to 30, all team members can be tested unannounced by NADA in training and competition.

The DOSB confirmed in February that it would send a team to Minsk 2019 having opted against boycotting the event.

The Organisation for Security and Cooperation in Europe described the procedure as "completely disproportionate".

He claimed the fact the European Games offer qualification opportunities for Tokyo 2020 should be taken into account with athletes' interests being the focus.