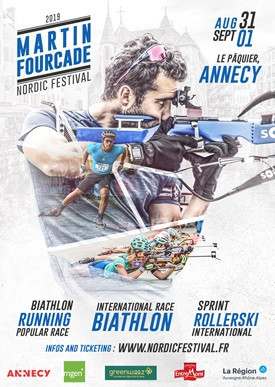 A host of the world's top biathletes are set to compete at the first edition of the Martin Fourcade Nordic Festival in Annecy later this year.

The two-day event – due to run from August 31 to September 1 – will feature six rollerski competitions in the French city, which unsuccessfully bid for the 2018 Winter Olympic Games.

It will feature an international summer biathlon race with some of the world's best cross-country skiers and biathletes, and rollerski sprint and biathlon-running races for the public.

The festival is being organised by French biathlon star Fourcade, a five-time Olympic gold medallist and 11-time world champion, and ALYANSKI, a French company which specialises in running sporting events and is chaired by his former team-mate Alexis Bœuf.

Johannes Thingnes Bø, winner of four gold medals at this year's World Championships and the reigning International Biathlon Union overall World Cup champion, is among those scheduled to participate.

The Norwegian will be joined by fellow biathletes such as Germany's Benedikt Doll, Quentin Fillon-Maillet of France, Italy's Dorothea Wierer and Finland's Kaisa Mäkäräinen.

According to organisers, more than 10,000 spectators are expected to attend over the course of the weekend.

"In 10 years on the world circuit, I had the chance to participate in the most beautiful races and events that have contributed to the development of my discipline," said Fourcade.

"During these 10 years, I dreamed of being able to share with the French public the unique emotions that these real shows have given me.

"It was important to me to promote my sport, by bringing it to the heart of the city and in a summer context.

"I hope that all Nordic ski fans and the general public of Annecy and France will be curious to come and share this moment with us."