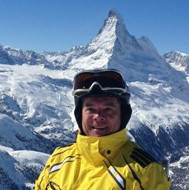 Cantonal Councillor of Obwalden Daniel Wyler has been elected to the Board of Directors for the 2021 Winter Universiade in Lucerne.

Wyler stepped into his position as the official representative of the Canton of Obwalden after Niklaus Bleiker’s resignation.

The Lucerne 2021 Management Board is led by President Guido Graf, Cantonal Councillor of Lucerne.

Bleiker is the vice-president.

The International University Sports Federation flag was recently handed over to Graf by Züsli.

Over the next three months, the flag will be set up in the Government building of Lucerne.

It will then travel from canton to canton until the Winter Universiade begins in January 2021.

Athletes from more than 50 countries are set to compete across nine sports.