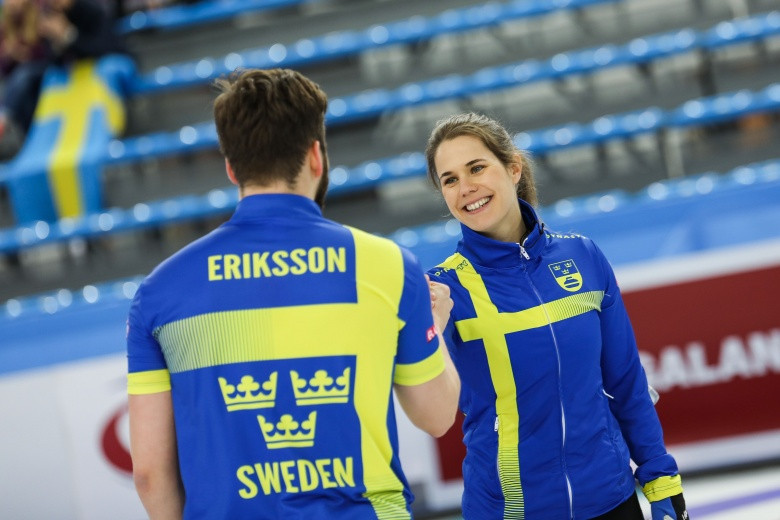 After losing 6-7 to Canada earlier in the week during the round robin in the Sørmarka Arena, the Swedes reversed their fortunes and earned this title for the first time thanks to a final draw to the button on the last stone of the eighth end.

"That was a really good game," Eriksson, a member of the team that won the World Championship title earlier this month in Lethbridge, having been an Olympic silver medallist at Pyeongchang 2018, said.

"From the get-go, we played really good, and the ice was perfect for the final."

Hasselborg, who skipped Sweden’s women to the Olympic gold medal last year, added: "We had a chance to make the last draw - and we made that."

Canada’s Gallant commented: "It’s not what we came here for but, you know, Oskar and Anna played really, really well."

Earlier, the United States pairing of Pyeongchang 2018 gold medallist John Shuster and Cory Christiansen, beaten 9-5 by Canada in their semi-final, made a slow start to the bronze medal playoff match against Australia - making their first semi-final appearance in this event -  but came through to win 5-4, earning the decisive point in an extra end.

For Australia, represented by Tahli Gill and Dean Hewitt, who had lost their semi-final against Sweden by 7-5, it was nevertheless the best showing in this competition.

"It wasn’t an easy task out there," said Hewitt.

"They put the pressure on us there for a lot of the ends and they played great and really fought back."

Christiansen added: "It was our goal to medal here and to do it for U.S. is amazing and exciting."