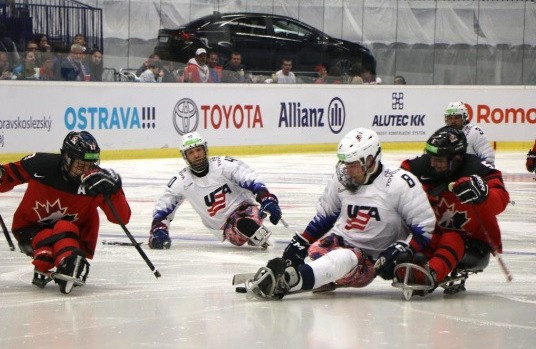 The Americans recorded a 3-1 victory to get their Group A campaign off to the perfect start.

Declan Farmer starred as he scored twice, with Noah Grove netting the other goal for the US at Ostravar Arena.

Canada had taken an early lead through Greg Westlake but it proved a fleeting moment of joy for the 2017 winners.

"It's always nice to start a tournament like this with a win," said US head coach David Hoff.

"It wasn't our perfect game by any means, but fortunately our compete level was there tonight and that was the difference.

"We'll rest up, focus on some areas we can improve and turn our attention towards another strong team tomorrow in South Korea."

South Korea, who claimed bronze at their home Winter Paralympic Games in Pyeongchang last year, also began with a win as they edged out Norway 3-2 in the other Group A match today.

In Group B, Italy and the Czech Republic recorded comfortable victories.

Pavel Kubes inspired the host nation to an 8-0 win against Japan as he scored a hat-trick, while Italy beat Sweden 4-0 in the tournament's curtain-raiser.

Action continues with the second set of group games tomorrow.