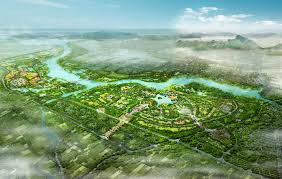 An ecotourism belt will be constructed alongside the Great Wall of China between 2022 Winter Olympic and Paralympic Games clusters Yanqing and Zhangjiakou.

The belt will start at Beijing International Horticultural Exhibition, located in the capital's Yanqing district. as reported by China Daily.

It will run until Zhangjiakou in Hebei province, around 130 kilometres away.

The aim of the belt is to protect natural environments and support conservation efforts.

Yanqing is set to host the Alpine skiing and bobsleigh, luge and skeleton events during the 2022 Games.

The cross-country skiing, Nordic combined and biathlon competitions will be held in Zhangjiakou, with some freestyle and snowboarding events also taking place in the city.

Beijing 2022 has promised to be a "green" Olympic Games through initiatives such as sustainable management of venues, low-carbon programmes and sustainable sourcing.

Six venues used during the Beijing 2008 Olympics are being adapted to prevent unnecessary construction work.