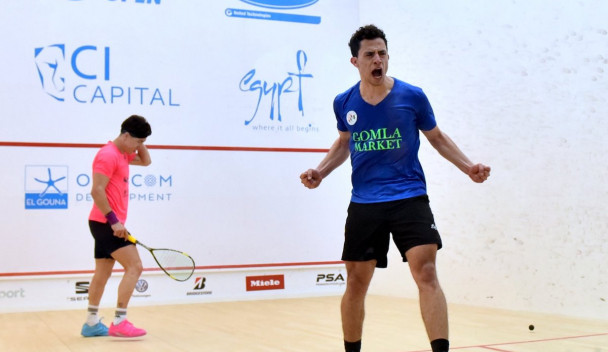 Egyptian wildcard Fares Dessouky earned his first win over a top-10 player since tearing his anterior cruciate ligament as he prevailed in a scrappy, four-game battle with sixth-seeded Colombian Miguel Ángel Rodríguez at the El Gouna International Squash Open in front of a home crowd.

Dessouky, the world number 42, spent 14 months on the sidelines due to the injury but has shown glimpses of getting back to his best since returning in January and reached the final of that month’s CCI International in Mumbai in India.

"It means a lot to me, it’s my first win over a top-10 player since the injury," Dessouky said.

"It was a very tough match, mentally and physically.

"The court was also a bit bouncy, so it wasn’t that easy, especially playing a very fit and strong player like Miguel.

"I was playing my own squash, my attacking games helped me today.

"The court didn’t bother me a lot, but there were long rallies, so it was hard physically."

Also advancing through to the quarter-finals today was ElShorbagy's brother Marwan, the defending champion.

Another player progressing to the last eight was Egyptian second seed Nouran Gohar, who proved too strong for compatriot Zeina Mickawy in an 11-9, 11-3, 7-11, 11-7 victory.

Standing between her and a place in the semi-finals is second seed Nour El Sherbini, an 11-5, 11-2, 11-1 victor at the expense of fellow Egyptian Nadine Shahin.

Today's play was split between the El Gouna Squash Complex and the glass court at Abu Tig Marina.

Competition is scheduled to run through to Friday (April 26).