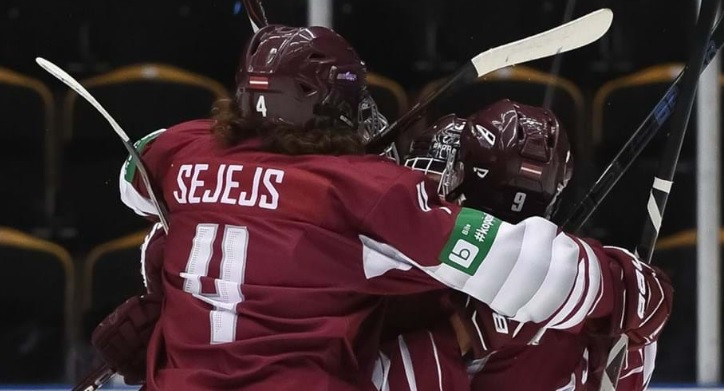 Latvia qualified for the quarter-finals as Switzerland beat Belarus to give their hopes of reaching the last eight a boost at the International Ice Hockey Federation Under-18 World Championship in Sweden.

The Latvian side beat Slovakia 2-0 to earn their first win of the tournament, which condemned Slovakia to the relegation round.

Ernests Osenieks and Ralfs Jevdokimovs scored second-period goals less than three minutes apart at Fjällräven Centre in Örnsköldsvik to guarantee their spot in the last eight for the first time.

They occupy the last available place from Group B and join the United States, Russia and Sweden in the next round.

Switzerland are in contention to earn a quarter-final berth from Group B following their 5-4 overtime win over Belarus at A3 Arena in Umeå.

🚨🇨🇭 With 18 seconds remaining in OT, Canova wins it! #U18Worlds

Jannik Cannova scored the winning goal in the overtime period after the match finished 4-4 at the conclusion of regulation time.

The Swiss team are fourth in Group A and will secure a place in the quarter-finals if they avoid defeat against defending champions Finland tomorrow.

Switzerland are two points ahead of Finland, who must win in normal time if they are to progress, going into the crucial contest.

Finland will play in the relegation round, comprising three matches, against Slovakia if they fail to claim maximum points.