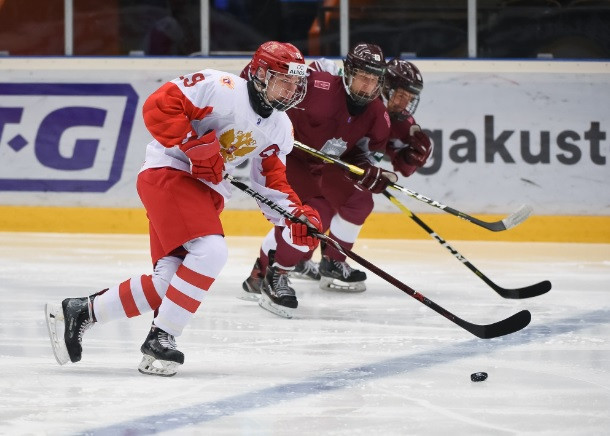 Russia kept pace with the United States at the top of Group B as they beat Latvia to claim their second win at the International Ice Hockey Federation Under-18 World Championship in Sweden.

The Russians earned a 5-1 victory at Fjällräven Centre in Örnsköldsvik to join the US on six points from their opening two matches.

Maxim Groshev put Russia in front 13 minutes into the first period before Raivis Ansons equalised after the restart.

Latvia were not level for long, however, as two quick-fire goals put Russia in the driving seat.

Semyon Chistaykov restored Russia's advantage and Dmitri Sheshin found the net less than a minute later to give his team a 3-1 lead.

Rodion Amirov and Takhir Mingachyov scored in the final period to complete a resounding win.

Russia are second in the group on goal difference behind the US and both are almost certain to reach the last eight.

In the other match played today, the Czech Republic recorded their first victory by crushing Switzerland 8-2 in Group A at A3 Arena in Umeå.

The Czechs are third in the group, behind Canada and Belarus, who have both already qualified for the quarter-finals.