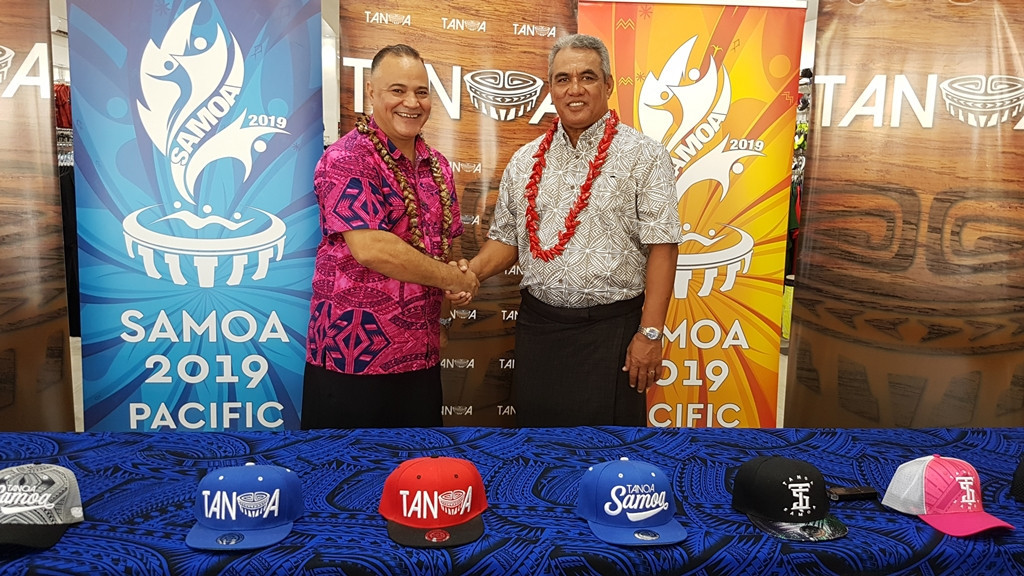 Tanoa Samoa Clothing Co. has become the latest sponsor of this year's Pacific Games in Samoa.

The announcement of the WST100,000 (£30,000/$38,000/€34,000) deal for the company to become the "official retailer" of the Games was made at a brief signing ceremony by the chairman of Samoa 2019, Loau Solamalemalo Keneti Sio, and the managing director of Tanoa Samoa, Taupa’ū Bruce Leiataua.

"We have been extremely blessed to have the love and support of our people, local businesses and Government agencies," said Loau.

"Tanoa Samoa signing on today to be part of our family of sponsors is continuous proof of that support.

"So on behalf of the Government of Samoa and the Organising Committee, I would like to say faafetai tele lava (thank you) to Tanoa Samoa’s management and staff, for reaching out and offering to support the biggest sporting event of the year.

"May the good Lord bless you for all you’re giving for the Games."

Taupa’ū claimed the deal to back the Pacific Games, due to take place between July 7 and 20, was a way for Tanoa Samoa to give back to the community.

"We at Tanoa Samoa are very excited to be a part of the biggest and most anticipated sporting event in the region, particularly as it will showcase Samoa and the sporting talents of our people," he said.

"When we first came into business, our focus was to bring local Samoan and Polynesian artists’ designs to life through clothing, and we have done just that.

"We have been blessed over the years with the expansion of our business in the Pacific region, including New Zealand and Hawaii, and we wish to share these blessings with our people.

"With this partnership, we hope to give back to our community through our support for the upcoming Games in July."