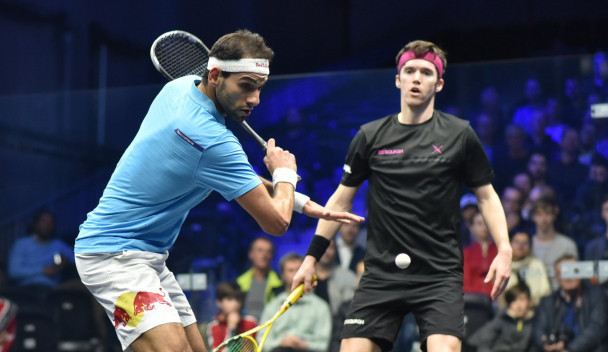 The Englishman came closest to matching the former world champion in the second game, levelling the scores at 8-8 with his accurate hitting in this Professional Squash Association (PSA) World Tour Gold tournament at DPD headquarters in Belgium.

But the Egyptian, seeded second, moved smoothly clear to win 11-5, 11-8, 11-7 win in 33 minutes and set up a meeting with his eighth-seeded younger brother, Marwan, who defeated Joel Makin of Wales in the final match of the night.

Earlier, a third Egyptian had reached the last eight in the men’s event – former world number one Karim Abdel Gawad.

The recently crowned Canary Wharf Classic winner was in unstoppable form as he put Kandra to the sword in 42 minutes.

Meanwhile, in women’s second-round action, triple world champion Nour El Sherbini earned an 11-8, 11-4, 11-2 win over the Malaysian who won the world title a record eight times between 2005 and 2014, 35-year-old Nicol David, who is in the course of her final campaign.

“It’s really hard to play Nicol, when you know it is the last season for her,” said the 23-year-old Egyptian.

“I always say it’s really special to play against Nicol, I have played her a lot of times and it is always special.

“She really did a lot for our sport and I learned a lot from her.”

Tomorrow will see the first quarter-final action get under way in the top half of the men’s and women’s draws.

It was the England number one’s second win over a top-10 player after his defeat of Abouoelghar’s compatriot Marwan El Shorbagy last month at the Canary Wharf Classic.

Rösner also advanced with a victory over an Egyptian player, beating Mazen Hesham in straight games.

Farag advanced from the second round with a straight-games win over England’s former world number one James Willstrop, while Rodriguez progressed thanks to a win in four games over England’s Daryl Selby.

Meanwhile, in the women’s draw, world number one Raneem El Welily of Egypt, who scrapped through to the quarter-finals after a five-game battle with England’s world number 22 Millie Tomlinson, meets Amanda Sobhy of the United States.