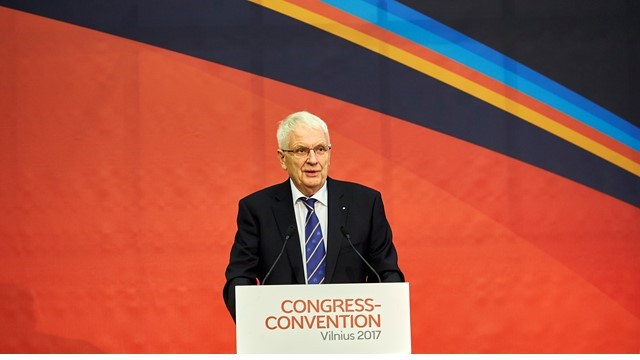 Svein Arne Hansen is set to be re-elected President of European Athletics when the governing body holds its Congress this weekend.

It was announced in February that the Norwegian, who turns 73 next month, would stand unopposed for a second term having first been elected in 2015.

When Hansen became President, he only intended to serve one term, but in April last year he admitted he would be "happy" to serve for a further four years if European Athletics' Member Federations wanted him.

The Congress, due to begin tomorrow and conclude on Sunday (April 14) at Hilton Prague Hotel in the centre of the Czech capital, will be the 26th of its kind – excluding extraordinary congresses – to be held since the formation of European Athletics in 1970.

It will also see the election of three vice-presidents and 13 Council members as well as members of the four European Athletics Commissions for a four-year term until 2023.

New rules introduced since the last elections now dictate that there must be at least one person of each gender among the President and vice-president positions.

There must also be at least three people of each gender on the Council.

"Elections are often referred to as historic, but I believe that this description is genuinely appropriate on this occasion because we will take important steps towards improving the gender balance of our senior positions," Hansen said.

"Constitutional changes over the past four years mean these elections will see at least three female Council members and at least one female vice-president elected.

"We have had female representation on the European Athletics Council since 1987 but there has never been a female vice-president.

"However, that is about to change."

Candidates will make their presentations tomorrow before the elections take place during the main part of the Congress on Saturday (April 13).

The first meeting of the newly-elected Council is scheduled for Sunday.

A total of seven people will stand for vice-president.

They include Great Britain's Cherry Alexander, France’s Jean Gracia, who has previously served as interim chief executive of the International Association of Athletics Federations and is standing for re-election, and Finland's Antti Pihlakoski, who currently sits on the Council and ran unsuccessfully for President in 2015.

There are also 25 candidates competing for the 13 positions on the Council.

Among those names is Spain's Raúl Chapado Serrano, a former triple jumper, as well as Austria's Sonja Spendelhofer and Estonia's Erich Teigamägi, who is President of the Estonian Athletic Association.

A full list can be viewed by clicking here.

In addition to the elections, the Congress will hear the financial reports for 2017 and 2018 and approve the financial plan for 2020 to 2023.

Amendments to the constitution and proposals from both the Council and European Athletics Member Federations will also be considered.

The Congress consists of the Council and delegates of the 51 Member Federations.