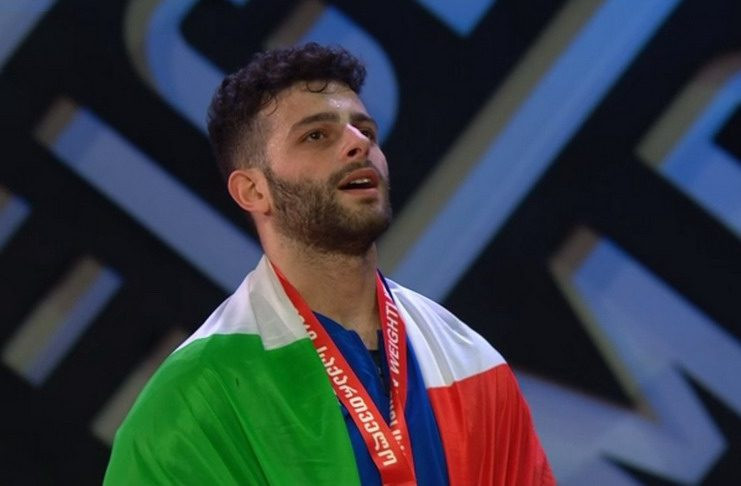 Russia had its first gold medal of the week at the European Weightlifting Championships in Batumi in Georgia and also welcomed back Apti Aukhadov, one of their lifters who lost a London 2012 Olympic Games medal for a doping disqualification.

There was a second medal in two days for Britain, a first ever place on the podium for Israel at a major championships, and a bronze for the team at the top of the medals table, Romania.

But the real drama on day five came in the men’s 81 kilograms, which ended with a second title of the week for Italy, a place on the snatch podium for two B Group lifters, a host of under-23 records, and yet another bomb-out for Daniel Godelli, the Albanian who had high hopes of being a contender at Tokyo 2020.

Godelli, 27, was a junior world champion in 2011 and has twice been a European Championships silver medallist.

He posted the highest entry total in Batumi in a field of 10, and duly decided to start on 165kg in the snatch.

It seemed an unnecessarily high-risk approach given he has such a shocking record.

In 13 international competitions since the start of 2012, Godelli has made 25 lifts from a potential maximum of 78.

Why he started at such a high weight is anybody’s guess, but the consequence is a total of zero points at the end of the first phase of Olympic qualifying, and no chance of a place in Albania’s team for Tokyo 2020.

He was outperformed by team-mate Erkand Qerimaj, who won a snatch bronze medal from the B Group and was an impressive sixth on total.

The B Group winner Andres Mata, of Spain, won a snatch silver medal and finished fifth on total.

Aukhadov, who returned to training early this year after serving his doping suspension, was a distant 12th from the B Group but at least he is in the Tokyo 2020 qualifying picture.

While Godelli was missing his lifts Ritvars Suharevs, the 20-year-old Latvian, reeled off a series of under-23 records as he made six from six to lead in the snatch and, with a few rivals yet to finish, on total.

He had to watch as he was overtaken first by Petr Asayonak of Belarus, then with the last lift of the night, by the Italian Antonino Pizzolato.

Pizzolato, 22, a bronze medallist at the 2017 IWF World Championships, needed 201kg to take gold and he did it impressively, celebrating loudly and exclaiming, "Italy, number one!"

After Mirco Scarantino’s victory at 55kg it was Italy’s second gold medal of the week.

Britain’s second medal came from Emily Godley, a silver behind the Russian Anastasiia Romanova, an easy winner of the women’s 71kg, with Romania’s Madalina Molie third.

A B Group lifter won a snatch bronze here too, Nikol Rubanovich taking an historic first for Israel.

Congratulations to @EmilyGodley for securing Silver 🥈at the European Senior Weightlifting Championships! A fantastic performance! pic.twitter.com/InGhJ0U1js

Despite Godelli’s failure on the day, Albanian weightlifting is heading in the right direction, according to the general secretary of their National Olympic Committee (NOC), who has been happy to see a complete overhaul of the sport after a series of doping scandals.

In May last year all weightlifters were dropped from Albania’s team for the Mediterranean Games, leading to heated arguments and a physical confrontation between Qerimaj and a senior member of the Albanian NOC.

Qerimaj said at the time that the decision by the NOC to suspend the Albanian Weightlifting Federation (AWF) because of its doping record was "madness, a scandal, a violation of human rights".

The lifters are in a better mood now, says Stavri Bello, general secretary of Albania’s NOC.

"At the beginning they were unhappy but now they have understood that the only way of developing the sport is for the weightlifting federation to work together with the NOC," said Bello.

"We have met the best athletes and their coaches to explain that we are here to help."

The President of the AWF resigned, the entire Board was replaced, the suspension was lifted, and Bello told insidethegames, "At the moment it looks good.

"The new Board are trying to change the old mentality of weightlifting, that you cannot achieve good results without drugs."

Godelli, Qerimaj, and Tuesday’s 73kg silver medallist Briken Calja have all served doping suspensions in the past, and when the double World Championships gold medallist Romela Begaj came up positive a second time early last year the sport was in crisis, prompting Albania to withdraw as hosts of the 2018 European Championships.

"A big change is they now have a doctor involved in all training and competitions," said Bello.

"The change of the Olympic qualification system [to individual] by the IWF (International Weightlifting Federation) has also been good, as lifters are responsible for themselves."

One of the most important aims in Albanian sport, said Bello, is to train coaches and sports administrators, which has been made possible with Olympic Solidarity funding.

"With our support the Weightlifting Federation are holding coaching clinics and working towards having more qualified coaches," he said.

"The media here have supported the changes, and although it’s more difficult, we want clean medals.

"The most important thing for us is to be qualified for Tokyo, because we have had weightlifters at every Olympic Games in which Albania has competed."