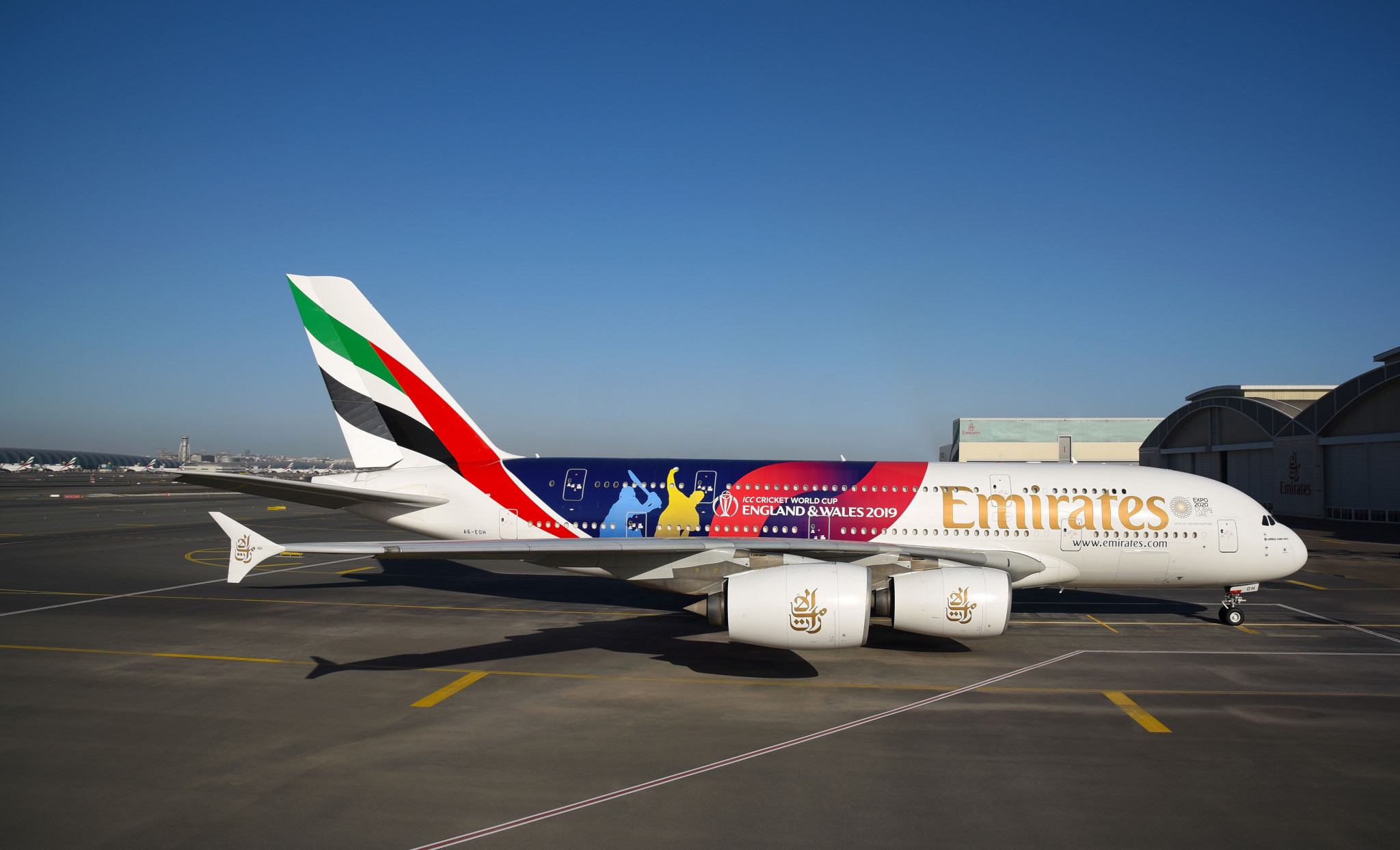 Emirates has revealed a special livery for its A380 airliner in the build-up to the 2019 Men’s Cricket World Cup.

Former India cricketer Virender Sehwag, a World Cup winner in 2011, helped to marshal the newly-emblazoned aircraft out of the Emirates Engineering hangar in Dubai.

Players were accompanied by Emirates Engineering staff who had worked on installing the decal, and who were later treated to a game of mini-cricket by the aircraft.

The Men’s Cricket World Cup trophy also made its debut at Emirates Engineering, where employees had the chance to take photos with it.

The attention-grabbing decal covers a substantial area of 694 square metres on the Emirates A380 fuselage and includes player silhouettes batting and bowling against a backdrop of vibrant shades of purple and pink.

The decal was installed on A6-EOH, which as part of proceedings flew to London Heathrow Airport in England, co-hosts of the 2019 Men’s Cricket World Cup with Wales.

Over the next few months, the aircraft is expected to fly to other airports in Great Britain, including Manchester and London Gatwick.

Cricket fans and aviation enthusiasts alike can also look out for the aircraft landing and taking off in Johannesburg, Mumbai as well as Emirates destinations served by the A380 in both Australia and New Zealand.

"It is a wonderful way to celebrate what I know is one of the most eagerly-awaited sport events of the year and fitting that its first journey is to our hosts in England and Wales."

Emirates, an ICC global partner, will be flying most of the national teams to the 2019 Men’s Cricket World Cup.

The tournament is due to run from May 30 to July 14 with teams competing from Afghanistan, Australia, Bangladesh, England, India, New Zealand, Pakistan, South Africa, Sri Lanka and West Indies.

"We are proud to be the official airline for the ICC Men’s Cricket World Cup 2019," said Boutros Boutros, divisional senior vice-president of corporate communications, marketing and brand for Emirates Airline.

"The reveal takes us one step closer to bringing the tournament to life for the nations competing in the ICC Men’s Cricket World Cup 2019, and for cricket fans across the globe.

"Emirates directly serves customers in nine nations participating in this year’s ICC Men’s Cricket World Cup, and we look forward to sharing the excitement of this passionate sport with cricket fans and communities around the world, particularly those who will be feverishly following their national teams as they attempt to clinch cricket glory."

In April 2016, Emirates Airline continued its long-standing relationship with the ICC by renewing a deal that ensures it will be a global partner through to 2023.