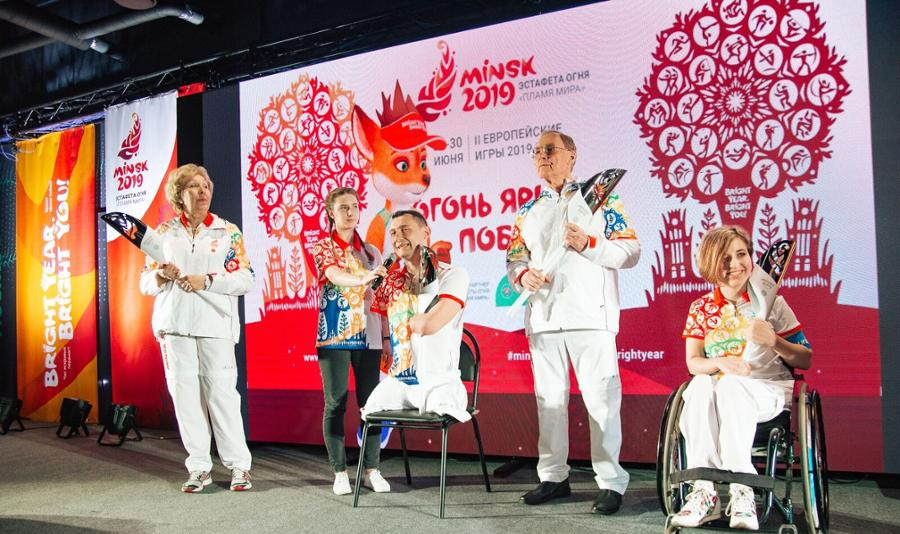 The event in Belarus’ capital city also saw the unveiling of the Torchbearers’ uniforms.

The Torch design was claimed to embody the concept of the second edition of the multi-sport event, with organisers stating it “inspires to dream and hints at the mysteries of Belarusian nature”.

Organisers have dubbed the European Games flame as the “Flame of Peace.”

“A long time ago, the famous Prometheus accomplished the feat of bringing fire to the people and since then, this ‘fire’ burns in the heart of every passionate person, symbolising achievements in various spheres.

“Today, we present the torch relay of the ‘flame of peace’ of the second European Games.

“Its very name already speaks of the goal that organisers of the multi-sports competition are pursuing – first of all, to unite all European countries around a wonderful holiday that will take place in Minsk and turn it into the brightest event of 2019.

“The aims of the ‘Flame of Peace’ relay fully align with the global goals declared by the United Nations."

The Torch weighs 1.7 kilograms and has a height of 81 centimetres, with the weight designed to make running with the Torch very comfortable.

There is also an option to attach the Torch, which is made of stainless steel, to a bicycle or wheelchair.

The Torch Relay is due start on May 3 in Rome, where the European Olympic Committees headquarters are based.

The relay will take place for 50 days and concludes with the lighting of the Olympic cauldron at Dinamo Stadium in Minsk on June 21 at the Opening Ceremony.

Some 55 locations will be visited by the torch, with Italy, Slovakia, Slovenia, Hungary, Austria, the Czech Republic and Poland among the countries on the tour, before it arrives in Belarus.

Mont Blanc, the highest point in Europe, will be among the landmark sights visited by the torch prior to its arrival in Belarus on May 12.

The Telay is due to feature 450 Torchbearers, 100 volunteers and 10 "flame keepers".

Organisers state the relay will be supported by Motovelo, an electric bike supplier.

They will help with the transportation of the Torch from various locations.