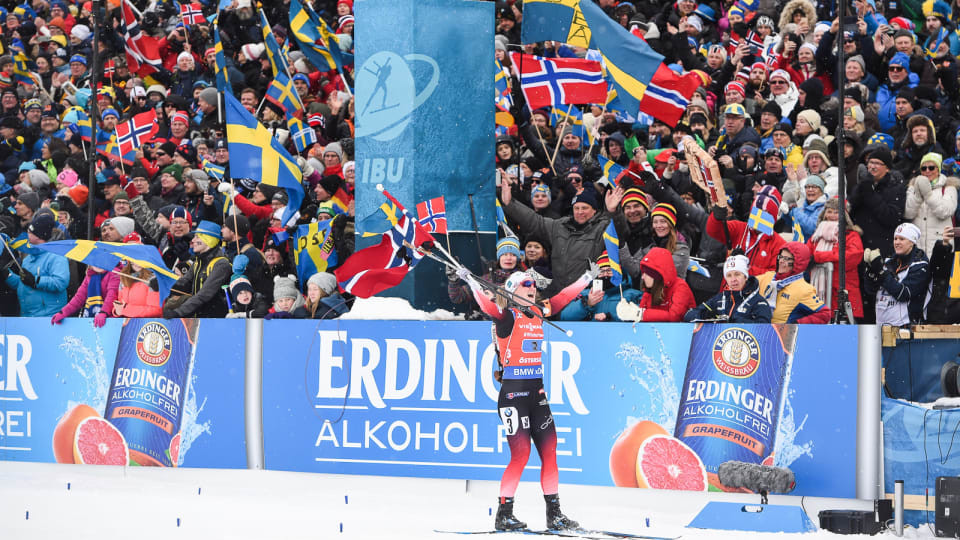 Norway completed a clean sweep of relay events at the International Biathlon Union World Championships as Marte Olsbu Røiseland and then Johannes Thingnes Bø brought home gold in the women’s and men’s races.

There was high drama in the women’s race as the home favourite athlete on the final stage, Sweden's 15 kilometres individual champion Hanna Oeberg came to the final standing stage alone, 21 seconds up on her Norwegian rival.

However, she needed all three spares while Olsbu Røiseland cleaned in five to take a commanding 12 second lead, with two kilometres to go.

"I saw Hanna shoot and she had to use some extra," said a relieved and exhilarated Røiseland in the aftermath.

"I just went for it, and  I am so happy that I was first out.

"We took this medal together and I am happy for the whole team."

On Thursday (March 14) the two Norwegian last leg choices had combined to win the inaugural single mixed relay at these Championships, and today, in front of 16,000 fans packed into the stands in Östersund, they respectively brought home the women’s 4 x 6 kilometres and men’s 4 x 7.5km titles.

Both had also been a part of the Norwegian team that had won the mixed team relay on the opening day of the Championships.

Bø, carrying a Norwegian flag for the final 400 metres, crossed the line jubilantly in 1:12.03.7, rounding off the work of Lars Birkeland, Vetle Christianen and elder brother Tarjei Bø, who had handed him a 43 seconds lead.

After France had dropped away when Martin Fourcade had to visit the penalty loop, Russia took advantage to take bronze, 64.1 seconds back, thanks to Matvey Eliseev, Nikita Porshnev, Dmitry Malyshko and Alexander Loginov.