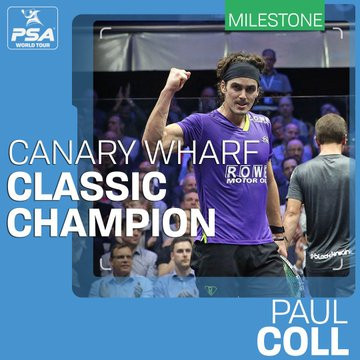 Paul Coll of New Zealand won the Canary Wharf Classic squash title in London today - and dedicated his victory to all those affected by the shootings at Christchurch mosques that have left 49 dead.

"Everyone back home, and in Christchurch, stay strong," he said in his on-court interview after an 11-8, 12-10, 11-3 win over favourite Tarek Momen of Egypt.

"It's a horrible thing that's happened in New Zealand.

"That was for you and everyone in Christchurch tonight.

"So stay strong everyone."

New Zealand's @paulcollsquash has a message for people affected by the recent tragic events in Christchurch ❤️ pic.twitter.com/5tEdvj8ZoN

The fourth seed provided the final twist in an often surprising tournament as he defeated the World Championship runner-up in straight games to win his first title in three years.

Momen had dispatched fellow Egyptian and defending champion Mohamed Elshorbagy in the semi-final, but had no answer to the man whose last tournament victory had also been at his expense, at the VAS tournament in England in 2016.

Coll took just three minutes over the hour in this Professional Squash Association event at the East Wintergarden venue in London.

He won the title without losing a game in the tournament.

For Momen, seeded third, it was a second successive defeat in this final following his fellow countryman Elshorbagy's win in 2018, when he was still world champion.

The two men had met five times previously, with Momen holding a 3-2 advantage.

But the super-athletic Kiwi has demonstrated that squash does not have to be the permanent preserve of players from Egypt.