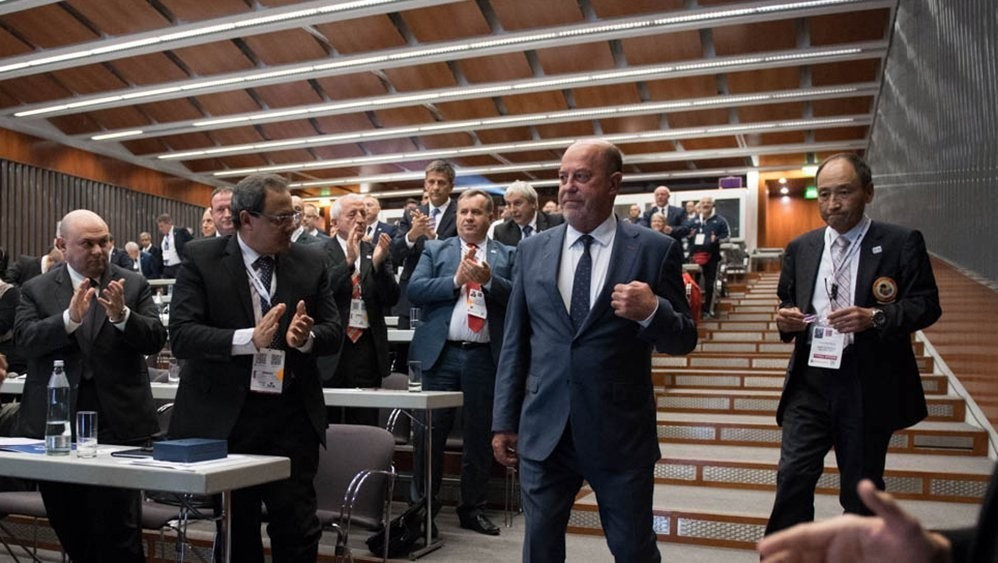 World Karate Federation (WKF) President Antonio Espinós has claimed it is "simply not logical" to exclude the sport from the Paris 2024 programme before its Olympic Games debut at Tokyo 2020 and has vowed that the international governing body will "continue fighting until the end" for the "restoration of its honour and its athletes' rights".

Last week, Paris 2024 stated it will not be reconsidering its proposal for new sports on the programme of the Olympic Games in five years' time after holding a meeting with leading figures from karate, including Espinós.

Espinós was accompanied by Francis Didier, President of the French Karate Federation, and Toshihisa Nagura, secretary general of the WKF.

Their aim was to convince Paris 2024 to agree to karate being a fifth additional sport, joining breakdancing, sport climbing, skateboarding and surfing - pending final approval from the International Olympic Committee (IOC).

But their efforts proved to be unsuccessful with Paris 2024 explaining that "there were no new elements provided by the WKF that would imply reconsidering the proposal made to the IOC".

Espinós insists, however, that the sport simply cannot be excluded before Tokyo 2020.

"Karate is in a unique situation," the Spaniard said.

"It is the only sport in the programme of the Tokyo 2020 Olympic Games that, regardless of being a world-class power in France, has been excluded from the list of additional disciplines of Paris 2024.

"This decision has been taken even before giving the sport the opportunity to make its debut in Tokyo.

"We cannot be excluded before Tokyo.

"It is simply not logical to exclude our sport before allowing it to showcase its values in Tokyo and before having enough arguments to evaluate its continuity as an Olympic sport."

Espinós has also highlighted the "tremendous notoriety" of karate in France as the main reason for its would-be inclusion as an additional sport at Paris 2024.

France is the number one nation in Europe and number two in the world, while the WKF claims karate boasts "outstanding popular support" in the country with 250,000 registered members - 55 per cent of whom are under the age of 18.

"There is no other country where karate is stronger than in France," Espinós added.

"It is a sport with tremendous popularity there - it is practiced by hundreds of thousands of youngsters, it has multiple world-class stars and it also registers high numbers of spectators who enjoy its remarkable sporting spirit.

"For all these reasons, we are surprised and even more outraged by the decision of Paris 2024.

"We believe that this decision was taken following a process without any guarantees, without clear rules, lacking in transparency, missing all basic values of fair play and unfit for current times and for an organisation and an event with such a global impact as this.

"We will not accept it and we will continue fighting until the end for the restoration of our honour and our athletes' rights."

Paris 2024's decision on the four additional sports still needs to be ratified by the IOC, which is due to discuss the proposal before it goes in front of its Executive Board between March 26 and 28.

The WKF has launched a high-profile digital campaign to try to convince Paris 2024 to add them to the programme.

The #Karate2024 campaign aims to "showcase the unity of the sport and requests the inclusion of the discipline in the list of additional sports to be added to the programme of the Olympic Games Paris 2024".