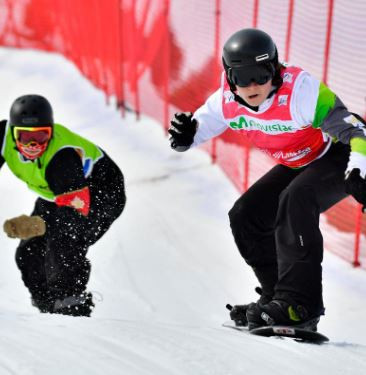 Bunschoten, who will take over the sport's Instagram account tomorrow as part of the International Women's Day celebrations, won the women's banked slalom lower limb two category in a time of 56.77sec, in front of Paredes, who took silver in 58.47.

France's Cecile Hernandez, who dislocated a hip and knee 11 days before the World Cup, won another gold in the women's banked slalom lower limb one category, clocking 53.07 to beat Brenna Huckaby of the United States, who was timed at 1:06.53.

Winner of the women's banked slalom upper limb one class was Kiana Clay of the US.

Join our #InternationalWomensDay celebration this Friday, 8 March, by following @LisaBunschoten's takeover on our @instagram account (@parasnowboard)!! Tune in! #BalanceForBetter pic.twitter.com/Jd25pk5boY

Maxime Montaggioni of France doubled his gold tally at La Molina with victory in the men's banked slalom upper limb one category, clocking 47.10 to beat fellow Italian Jacopo Luchini, who had a best time of 47.73.

Chris Voss of The Netherlands also claimed his second gold of the World Cup as he clocked 51.94 in the men's banked slalom lower limb one category, in front of Croatia's Bruno Bosnjak who was timed at 53.80.

Tomorrow will mark the final day of action in the fifth World Cup event, and the last before the World Championships at Pyha in Finland from March 25 to April 1.