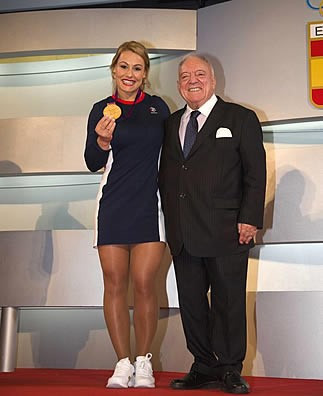 Spain's Lidia Valentín has officially made history as the first female weightlifter to medal at three Olympic Games, having been belatedly awarded the women's 75 kilograms gold from London 2012 at a ceremony in Madrid.

With a silver medal at Beijing 2008 and a bronze from Rio 2016, the 34-year-old now joins an exceptionally-limited club with a complete set of Olympic medals from three different Games.

Valentín had originally finished in fourth place at London 2012, but re-analysis of samples conducted by the International Olympic Committee (IOC) saw all three athletes who lifted more disqualified and handed suspensions for their abuse of anabolic agents.

Valentín, the 2017 and 2018 International Weightlifting Federation (IWF) Weightlifter of the Year, has shown great consistency throughout her career.

She achieved either an Olympic, world or European podium placing every year from 2007 to 2018, except in 2010, when despite lifting 3kg more than in her third-place finish in 2009, she finished fourth at the European Championships.

In 2018, following the IWF’s re-organisation of the bodyweight categories for men and women, Valentín moved up to 81kg, winning gold with a total just 1kg less than her Beijing 2008 finish a decade earlier.

"Dedicating myself to weightlifting for an athletic career of nearly 20 years has brought me greater rewards than I could ever have imagined," Valentín said.

"I have made friends from every continent and lived some fantastic moments.

"But to finally be able to hold the gold medal from London 2012 has filled me with so much joy.

"It has not been an easy period for the sport that I love, but this gold medal is clear proof that patience and honesty are rewarded."

Valentín was accompanied at the ceremony by sporting and Governmental officials, family, coaches and technical teams, and media.

"The protection of clean athletes is a team effort, and in this case the team has included the IWF, WADA [World Anti-Doping Agency] and the IOC," IWF President Tamás Aján said.

"The message of this effort is very clear: if you cheat, you will be detected.

"A stolen moment on a podium is limited in time.

"Lidia has shown with her patience as she waited for her London 2012 gold medal that she is a true champion and I know she has the admiration of the clean weightlifting community for this."

Valentín, one of the most popular weightlifters within the sport, was also promoted to Beijing 2008 silver after three dopers ahead of her were disqualified.

The Spaniard was officially upped to first place at London 2012 when the IWF approved the new finishing order on December 9, 2016.

She received her Beijing 2008 silver medal at a presentation ceremony in Madrid in January 2018.

Following the IOC’s reanalysis of the Beijing 2008 and London 2012 samples, the IWF has redoubled its anti-doping efforts, adopting the widespread recommendations of the Independent Clean Sport Commission.

Countries with multiple anti-doping rule violations arising from those editions of the Olympic Games found themselves suspended from all competition for up to a year.

New weight categories and corresponding world records have also been accompanied by a uniquely innovative Olympic qualifying system that now sees countries with a track record of clean sport rewarded with spots in Olympic competition.