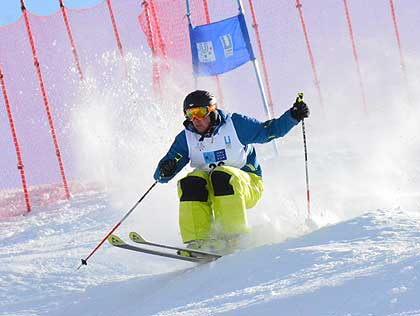 Lucerne 2021 will consider the inclusion of moguls and ski orienteering to the programme for the Winter Universiade.

The prospect was discussed by the Swiss organises with the International University Sports Federation (FISU) at the ongoing edition of the Universiade here.

Nine sports are currently earmarked to feature on the Lucerne 2021 sport programme, including alpine, cross-country and freestyle skiing.

Freestyle skiing will be part of the compulsory sport programme for the first time at the Winter Universiade.

Disciplines have featured at each edition of the Winter Universiade since debuting in 2005 in Austria, with the exception of the 2007 in Turin.

FISU have recommended moguls and dual moguls competition could potentially be added to the programme in the Swiss city.

The organisation believe the additions would fit with the current programme of Lucene 2021.

Ski orienteering could also make an appearance at Lucerne 2021, with the sport having made its Winter Universiade debut yesterday here.

The sport has already been included on the programme for Lake Placid 2023.

Lucerne 2021 are expected to confirm whether they will include the discipline this June, where a positive decision would ensure ski orienteering would feature for three consecutive editions of the university sport event.

Swiss National Olympic Committee director Roger Schnegg presented FISU with an update of Lucerne 2021’s preparations, prior to the city receiving the FISU flag at the Closing Ceremony here.

Accreditation, food and beverage, marketing and sponsorship, communications, workforce planning, volunteers and uniforms were among areas where the organising committee outlined progress.

Delegation services and the planning of cultural performances were also outlined to FISU.

Lucerne 2021 have also launched a social media campaign with the hashtag #TwoYearsToGo as they start to increase their publicity and promotion of the Universiade in the Swiss city.

The promotion will increase following Krasnoyarsk 2019, when the focus moves away from the Russian city.

It comes with the Swiss officials having been part of the observer programme at both events, where they have sought to glean information which could prove useful to their hosting of the Winter Universiade.