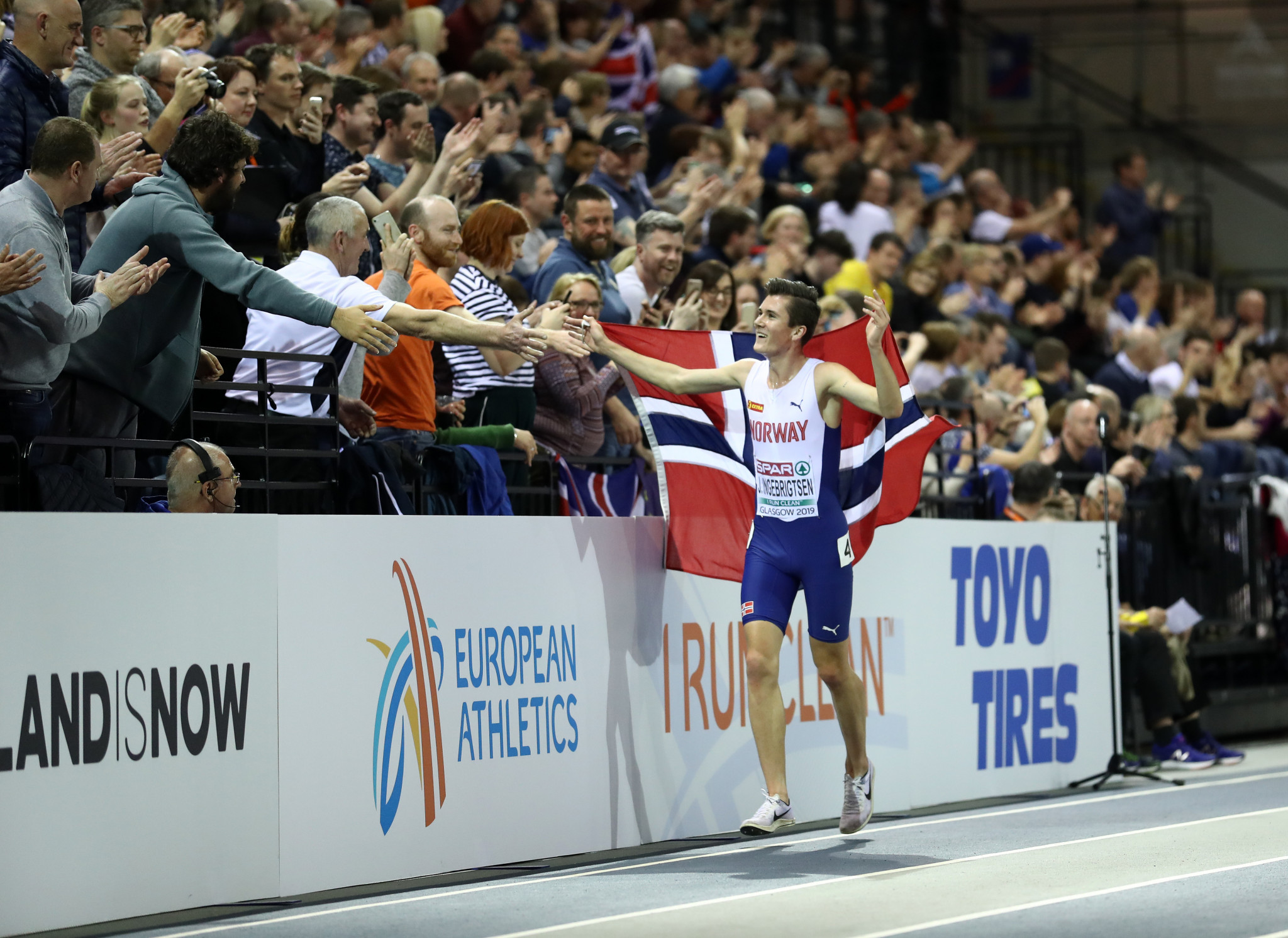 Norway, without a gold medal in more than 50 years of European Athletics Indoor Championship history, tonight won two in the space of half-an-hour as 18-year-old Jakob Ingebrigtsen and then Karsten Warholm obliged in the 3,000 and 400 metres respectively.

Elsewhere on a night of high emotion, Italy’s charismatic high jumper Gianmarco Tamberi earned victory with 2.32 metres to signal his full return after the traumatic injury he suffered when apparently poised for glory at 2016 Olympic Games in Rio de Janeiro.

And the men’s and women’s 60m titles went respectively to Ján Volko of Slovakia, in 6.60sec and Poland’s Ewa Swoboda, who clocked 7.09.

Ingebrigtsen, who last year became - twice over - the youngest male outdoor European champion in taking 1500m and 5,000m gold, completed the first part of his matching indoor double here with another preternaturally calm and commanding victory.

Given the manner of his performance, few would bet against him falling short of a double double with the 1500m final to come in tomorrow’s last day of competition at Glasgow 2019.

Norway’s night got even more golden as Warholm, the world and European 400m hurdles champion, won in 45.05 - equalling the European indoor record set in 1988 by East Germany's Thomas Schönlebe.

Shortly before these Championships began, the ebullient Warholm had announced on social media that he had changed his mind about staying away from Glasgow – accompanying the news with a picture appearing to show him holding his coach at gunpoint and tied up in a chair.

The means of expression was inimitable.

With his main rival, Spain’s Oscar Husillos, in his sights - one place outside him in lane six, Warholm set off at his habitual ferocious pace, taking a clear lead as the lanes broke – a lead he never looked likely to lose.

Ingebrigtsen, aided and abetted by his eldest brother Henrik, European 1500m champion in 2012, had taken his habitual control of the race from the early stages and moved smoothly away from all challenge – with his elder brother watching his back - to cross the line, one forefinger raised, in a time of 7min 56.15.

Behind him, however, a desperate struggle took place for silver as Scotland’s own Chris O’Hare, who had been the only athlete to stay in touch with the Brothers Ingebrigtsen as they charged for home over the final lap, moved up to challenge, and then pass, the moustachioed figure of Henrik.

But in the final stride Ingebrigtsen senior dived for the prize, and it took a photo-finish to discern that the home favourite, whose final charge had raised the temperature and decibel levels, had indeed taken second place.

"It wasn´t easy, there were a lot of elbows," said Jakob Ingebrigtsen.

"It was a really good competition with good athletes and I´m glad to be on the podium.

"Some other races started with a high pace and this wasn´t like that.

"I think the others had respect for us and they handed it to us so that we could make it our race.

Tamberi’s winning height equalled his own European lead this season, with silver being shared by Ukraine’s Andriy Protsenko and Konstadinos Baiotis, both of whom cleared a best of 2.26m with the same sequence of subsequent failures.

But, it being Tamberi, the competition was as much about emotion as height.

And that emotion reached the heights.

It has been a long and winding road back for him after the serious ankle injury he sustained in Monaco five days after winning that European title in Amsterdam - and just minutes after he had set a national record of 2.39m that appeared to have set him up for a huge challenge at the imminent Rio 2016.

Tonight, however, Gimbo - his longtime nickname - was properly back. Italian flag painted on his left shoulder, half his beard shaven off between qualifying and final, as is his wont.

Ready for take off…

"It's something I was expecting for too long.

"I want to tell everyone what happened over the past two years and how serious my injury was.

"Yes, Gimbo is back and only I and a couple of people know what it means.

"I knew I felt great, it was only me who could lose this competition tonight.

"My conditions were amazing.

"I tried to focus for my season´s best but it was impossible.

"'Don't ruin this moment because it´s your moment.'

" I knew I could come back one day.

"Now I want to enjoy this moment.”

Emotions in the next-door pole vault competition ran almost as high as Poland’s 29-year-old Pawel Wojciechowski, and unexpected world outdoor champion eight years ago, frustrated the efforts of his 26-year-old compatriot Piotr Lisek to successfully defend the title he won in Belgrade two years ago.

Wojciechowski, meanwhile, had teetered on the brink of an early exit, only clearing 5.65m at the third attempt, before failing at 5.85m and passing to 5.90m.

The gamble paid off, however, as the height - a personal best - was cleared with his last available effort.

Lisek could do no more - missing 5.90m twice before one final failure at 5.95m settled him for the silver medal.

"It´s all been successful although it was a difficult start," Wojciechowski said.

"You need to be a fighter and believe till the end.

"Our coach was totally right in saying that you need to fight and have faith."