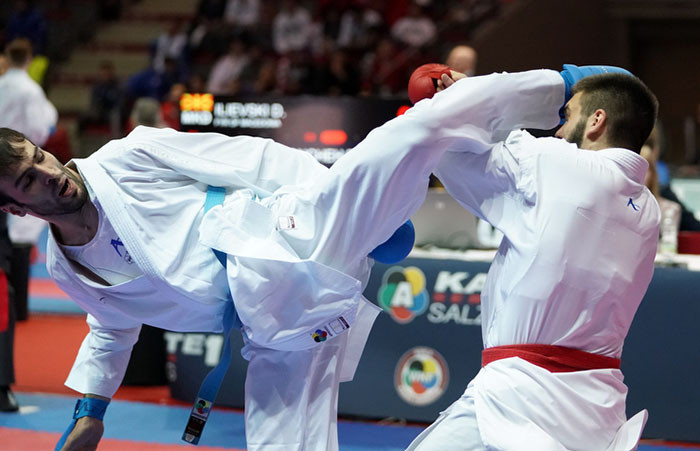 Ugur Aktas of Turkey justified his status as the one to beat in the men's under-84 kilograms kumite division as he overcame Iran's Zabiollah Poorshab to reach the final of the category at the Karate 1-Series A event in Salzburg.

The Karate 1-Premier League grand winner dispatched his Iranian opponent 4-1 to progress to tomorrow's gold medal bout at the Salzburgarena.

Aktas will have to defeat another karateka from Japan if he is to secure victory as Mahdi Khodabakhshi beat Azerbaijan’s Aykhan Mamayev to join him in the final of the World Karate Federation tournament.

Aktas' compatriot and fellow grand winner Serap Ozcelik was unable to follow suit as she lost 1-0 to Ayaka Tadano in the semi-finals of the women's under-50kg kumite competition.

Tadano, one of four Japanese athletes who reached the final of their respective divisions, will take on Sara Bahmanyar of Iran, a 2-0 victor over Shiau-Shuang Gu in her semi-final.

Taravat Khaksar will also have the chance to claim gold for Iran as she booked her place in the title decider at under-55kg.

Elena Quirici of Switzerland, who took gold at January's Karate 1-Premier League in Paris, continued her pursuit of a second straight major victory by sealing a berth in the women's under-61kg final.

Quirici was pushed all the way in her semi-final by Kayo Someya of Japan, eventually sealing a hard-fought win by decision.

The event in Salzburg concludes tomorrow with finals in all kata and kumite categories.