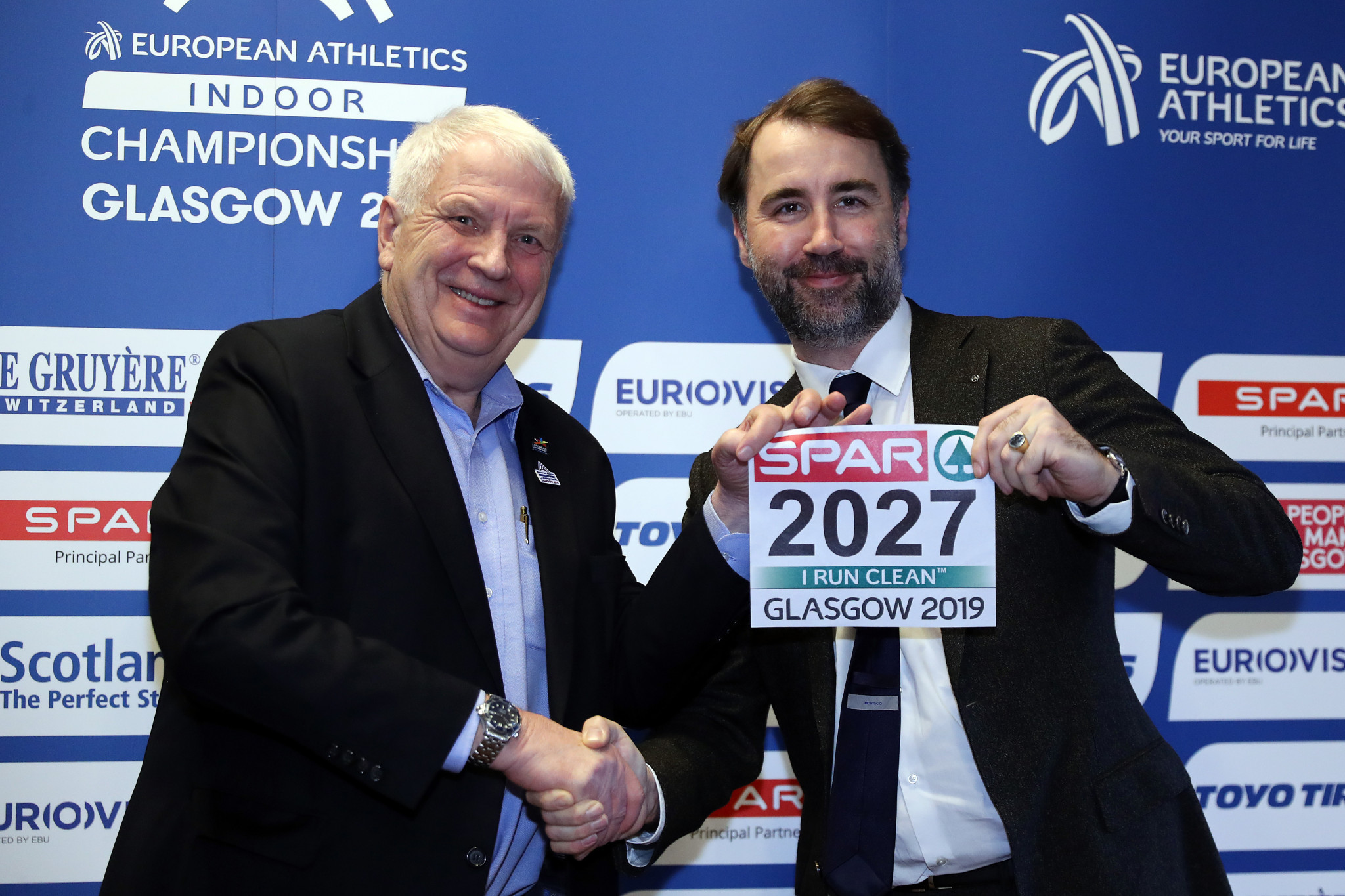 European Athletics (EA) announced a renewal of its principal sponsorship with SPAR International for another eight years on the eve of its Indoor Championships that start here tomorrow.

The announcement and signing - involving EA President Svein Arne Hansen and SPAR chief executive Tobias Wasmuht - took place at Glasgow's City Chambers during the official pre-Championship press conference before the action gets underway in the Emirates Arena from tomorrow until March 3.

The new deal, which runs until 2027, means that the international food retail chain will have been sponsors of European Athletics for more than 30 years, having signed up in 1996.

"It's the longest sponsorship deal in our history," said Hansen.

"And possibly one of the longest in sporting history."

Hansen added that more European Athletics history would be made at the impending 35th Indoor Championships in terms of levels of television coverage.

He said broadcasting plans for the Championships currently involve 418 hours of live and/or delayed coverage throughout the world.

"This makes this European Athletics Indoor Championship the most successful in recent history in terms of TV coverage," Hansen said.

Reflecting on the previous occasion when Glasgow hosted these Championships, at the Kelvin Hall Arena in 1990, Hansen added: "We are delighted to be back here.

"It is a measure of how our sport has grown in the last three decades, even considering the changes in the political landscape in that time, that European Athletics has 49 countries taking part in this year's Championships, and 637 athletes competing."

This makes the Glasgow 2019 Championships the largest European Athletics Indoor Championships - the previous largest was Prague in 2015 with 629 athletes from 49 nations.

"I am very proud to say that we are going to have a lot of our big stars here for these Championships," Hansen added.

Behind the scenes at the @EmiratesArena as the countdown continues 🎥👇#Glasgow2019 pic.twitter.com/eGir3ArSKW

Muir is one of nine Scots selected for the British team here - a record - and will seek to match the exploit of her compatriot, 800m runner Tom McKean, who won gold at the 1990 edition of this event.

Muir's first test will come in tomorrow evening's 3,000m final in the arena that was built alongside Celtic's Parkhead Stadium as part of the hosting of the 2014 Commonwealth Games.

Home attention on the first evening will also be focussed on Katarina Johnson-Thompson, the current world indoor pentathlon champion, who will seek to add another European indoor pentathlon gold to the one she won in 2015.

Among Ingebrigtsen's main rivals in Glasgow will be his two elder brothers, both of whom have also won European 1,500m gold outdoors, Henrik and Filip, with the latter electing to concentrate on the metric mile.

Among the challengers to the Ingebrigtsens over 3,000m will be Scotland's own Rio 2016 5,000m finalist Andrew Butchart.

But young Jakob's demeanour and words at today's press conference were ominous: "I'm not here to come second or third," he said calmly.

In the women's 60m, Ewa Swoboda, joint top of this year's world rankings with 7.08 seconds, will attempt to become the second Pole to win this title since the late Irena Szewinska, the multiple Olympic, world and European champion, managed the feat in 1969, when the women’s sprint was held over 50m.