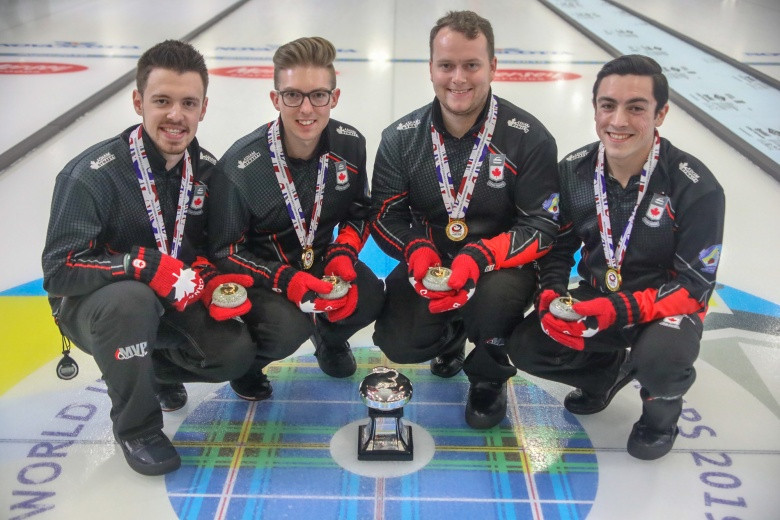 Hosts Canada defended their men's title at the World Junior Curling Championships but their women's side missed out to Russia.

Tyler Tardi skipped the Canadian men to a 9-4 victory over Switzerland in their final at the Queen's Place Emera Centre in Liverpool.

The Swiss could only respond with a single before Tardi's open hit for three created a commanding 5-1 lead.

Switzerland could not get back into the game and when skip Marco Hoesli slipped up with a heavy draw, Canada stole two more points to move out of sight at 7-1.

Hoesli, aided by third Philipp Hoesli, second Marco Hefti and lead Jannis Spiess, did manage a single point in the sixth end but the damage had been done and Tardi removed two Swiss stones in the seventh to bring the score to 9-2.

Switzerland added a double of their own in end eight before shaking hands.

The result means Tardi has retained the title he won in Aberdeen in Scotland in 2018.

"We had a good game last night and a good debrief, hopefully to bring the good stuff out today," the Lillehammer 2016 Winter Youth Olympic Games champion said.

"My team-mates were unreal in this game, they made my job easy.

"It's fun to be out there when you only have to throw nose-hits, so a huge thank you to my team for making my job easy."

In the women's final, the Russians pipped Canada 8-7 after an extra end to deny the host nation a double.

After a blanked first end, home skip Selena Sturmay drew into an empty house for two before the sides exchanged singles.

In the fifth, Russia managed two of their own to leave the match poised at 3-3.

Canada, with third Abby Marks, second Kate Goodhelpsen and lead Paige Papley, fell behind for the first time when Sturnmay rolled out to allow the Russians a steal of one.

Singles were then exchanged before Russia's skip Vlada Rumiantseva erred in the ninth, sending down a heavy last draw which allowed Canada to pinch three and move 7-5 in front.

Rumiantseva, backed by third Daria Morozova, second Irina Riazanova and lead Vera Tiuliakova, found the two they required in the final end, however, and then took the match on the extra end when Sturmay was heavy with her last draw.

"We were nervous in the final and we think the perfect draw weight was necessary for our win," said Rumiantseva.

"But we're so happy to be world champions and it feels fantastic."