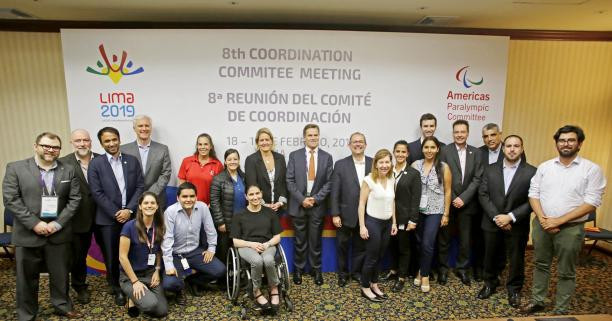 The Americas Paralympic Committee (APC) has stressed there is still much work to do in preparation for this year's Parapan American Games in Lima but added they are generally satisfied with progress after the final Coordination Commission meeting in Peru.

With the Games now only six months away, due to start on August 23, several meetings featuring APC and International Paralympic Committee (IPC) officials, took place at the Swissotel in Lima after which APC President Julie Dussliere claimed preparations are "well on course".

"I want to thank Lima 2019 for all the work they have been doing to make the Games successful," she said.

"We are satisfied that they are well on course.

"These have been productive and fruitful meetings and we could see first-hand the many areas of preparation that are going really well.

"Lima 2019 has been diligently working on the venues, facilities, accessibility and infrastructure that will be the backbone of these Games and the legacy that will be left long after the Games are over."

Dussliere went on, though, to admit that not all preparations are as far advanced as the APC would like.

"However, they need to keep up the momentum as there is still much work to be done in some key areas such as anti-doping, operational services and protocol over the next six months," she said.

International Paralympic Committee (IPC) chief executive Xavier Gonzalez was more specific with his concerns, revealing Lima 2019 is "yet to finalise a plan for accessible transportation", which he warned is "fundamental", to the success of the Games.

"At the same time, the production of an integrated Parapan-specific marketing, ticketing and communications plan is fundamental as Lima 2019 aim to fill the venues during the Games," Gonzalez said.

"From now until the beginning of the Games, it is very important that the IPC/APC and the Organising Committee continue working closely together."

Lima 2019 President Carlos Neuhaus added that he wants "Peru’s highest authorities", such as the President Martin Vizcarra and Lima Mayor Jorge Muñoz, to continue being involved in preparations.

"We want to raise awareness of what still needs to be done for people with impairment," he said.

"Overall, we are moving forward towards the Games and the Government is satisfied with that.

"Work is going well and the VIDENA sports complex will be an example of accessibility."

The Parapan American Games are due take place between August 23 and September 1 shortly after the able-bodied Pan American Games, featuring 1,890 athletes competing in 17 sports.

This is not the first time concerns over preparations have been raised.

In 2017 the then-named Pan American Sports Organization - now Panam Sports - raised serious concerns over the construction of venues and a lack of sponsorship agreements.

It was noted, however, that previous editions of the Pan American and Parapan American Games have faced similar problems in the build-up, but eventually delivered a successful event.

To date several venues remain under construction, including the athletics, swimming and track cycling facilities.

The majority of venues are due to be completed by the end of next month.