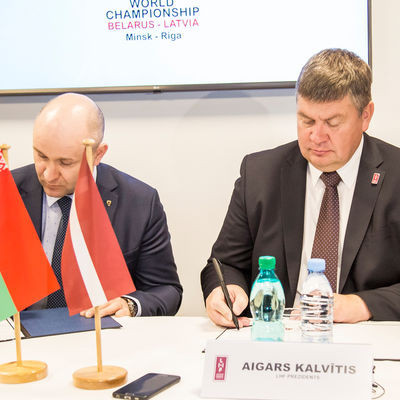 It specifies the budget for the tournament, the responsibilities of each Federation and the event’s marketing strategy.

It comes almost two years after the country’s capitals Minsk and Riga were selected as hosts.

Speaking at a press conference in Latvia’s capital Riga, LHF general secretary Viesturs Koziols said both sides had agreed on a slogan "Passion, no borders".

"It reflects the relations between the two countries," he said.

"There are no boarders between us in the love of hockey.

"Over the past months we have been working very closely with our Belarusian colleagues and moving synchronously.

"Sure, it will be the same in the future."

At the same event the deputy chairman of the FHB Sergei Goncharov, also a member of the IIHF Council, revealed they hope to break an attendance record at the event in three years’ time.

"In 2014, the World Championship, which hosted Minsk, became the best in attendance in history," Goncharov said.

An average of 11,589 fans per match was then achieved at the 2015 World Cup in Prague and Ostrava and it is that figure which the FHB and LHF m to break in 2021.

The Championships is scheduled to go ahead from May 7 to 23 in 2021 with the semi-finals and final will all be held in the Belarusian capital Minsk.