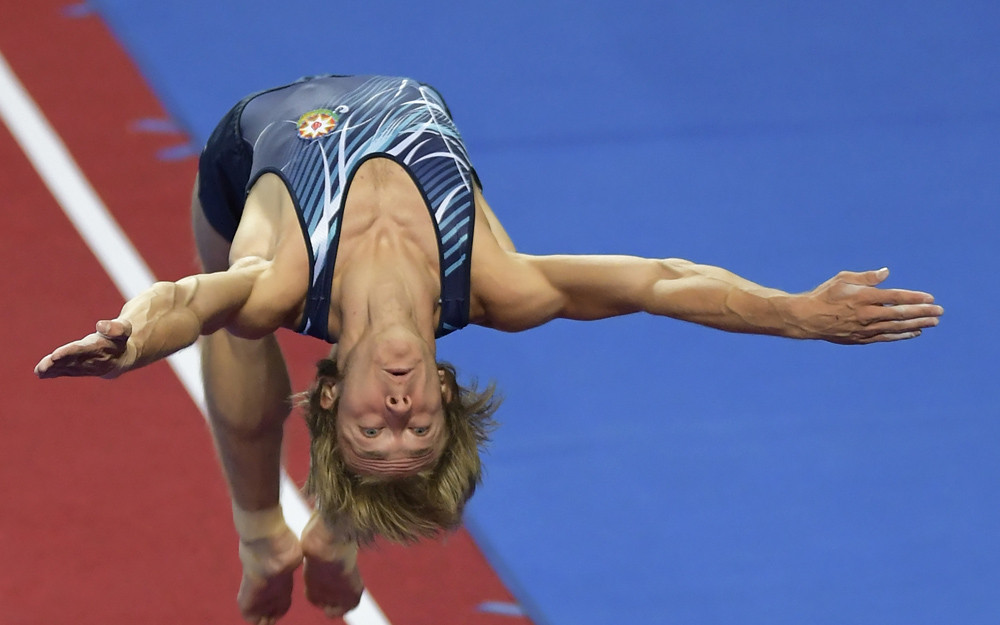 All eyes will be on Azerbaijan's Mikhail Malkin when he competes in front of a home crowd at the season-opening International Gymnastics Federation (FIG) Trampoline World Cup in Baku this weekend.

The 22-year-old will be returning to the scene of his 2018 European Championship gold medal-winning tumbling performance for the two-day event at the National Gymnastics Arena.

"Of course I am so excited," Malkin said.

"The main thing is to keep calm, keep control of the nerves and excitement and then I can execute the elements in the way I want.

"I know the elements so well, I just have to go out there and do them.

"I do feel a real responsibility, performing in front of my audience, people who are waiting for me to do something incredible."

One of the men he beat at last April’s European Championships was Russia’s Vadim Afanasev, the 2015 World Age Group champion.

Afanasev got his revenge at November’s World Championships, claiming the gold medal in front of his home crowd in Saint Petersburg, and the battle between the pair is set to be a highlight in Azerbaijan's capital.

Malkin, who surprisingly failed to qualify for the finals in Saint Petersburg, is hoping the competition will prove the first step towards achieving his major aim for 2019 - winning a medal at the World Championships, scheduled to be held in Tokyo from November 28 to December 1.

"It didn’t happen at last year’s World Championships like I wanted," Malkin said.

"Every day I am working in training to make sure this doesn’t happen again.

"I never want to have a day like that again.

"My big aim this year is to at least win a medal at the World Championships and be the first person from Azerbaijan to do this."

One pair competing in Baku who know all about securing national firsts are trampoline’s Hikaru Mori and Megu Uyama.

In what was one of the most inspiring sports stories of 2018, childhood friends Mori and Uyama were paired together just a week before the World Championships - following injury to Mori’s usual partner - and went onto win the women’s synchronised gold medal.

All three pairs will be in Baku, with the Canadians and Mexicans competing in both the synchronised and individual competitions and Mori and Uyama contesting just the individual event.

The competition, the first in the eight-stage 2019-2020 World Cup series, offers the opening step in qualification for next year's Olympic Games in Tokyo.

The best four results from the first six World Cup Series - those held between now and April 2020 - count towards qualification for next year's Games.

"If I focus on my target of winning a medal, I can see the possibility of qualifying for the Olympics in my home country," Mori said.

"I want to just be steady and not make mistakes.

"Even though trampoline is not such a big sport in Japan, we were invited to all the big awards after we won the world title.

"We appeared on TV many times and could not believe how our number of followers on Twitter and Instagram exploded."

Among many others, Mori and Uyama will be up against defending World Cup series champion Yana Pavlova of Russia.