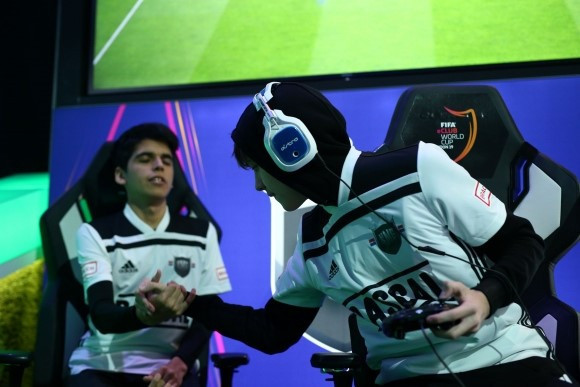 The winning team was made up of Nicolas "KiNG nicolas99fc" Villalba and Donovan "KiNG Tekkz" Hunt, the two current world number ones on both PlayStation and Xbox.

They emerged to claim the world title after a clinical performance which saw them defeat Dijon SCO in both legs at Sky Sports Studios in Isleworth.

"The competition in eFootball to qualify and compete at these live events is now so intense.

"To come away with the FIFA eClub World Cup title, as well as the prize money and 19 Global Series Points, is really special."

The crowning of the new FIFA eClub World Cup champion capped off two days of action in London, where 32 of the world's best eFootball players took a significant step forward on the road to the FIFA eWorld Cup as well as the introduction of a new 2v2 team format to the competition for the very first time.

Two kings 👑 on the #FIFAeClubWorldCup throne 🔝

We had a chat with @F2Tekkz & @Nicolas99fc after their team triumph👇

The format saw two players play together as one team in the final round of each tie in the group stage, as well as the tie-breaking tie in the knock-out phases.

It provided a new tactical element for players and teams to contend with during eFootball's pinnacle club competition.

"As the pinnacle club event in the eFootball calendar, the FIFA eClub World Cup 2019 has provided two days of high drama with the 2v2 team format adding an exciting new dynamic for players and spectators at this year’s event," Christian Volk, director of eFootball and gaming at FIFA, said.

KiNG esports reached the final despite both their players losing one-on-one games that forced third matches against Imperial in the quarter-finals and Futbolist in the penultimate round.

Defending champions Brondby IF were eliminated in the group stage on day one.

They won the first two editions of the event.