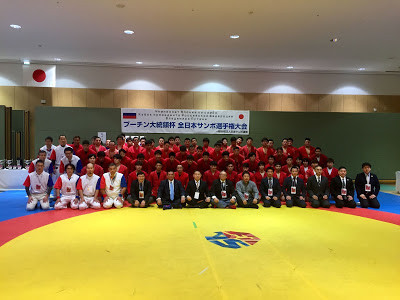 Medals were decided across 13 weight categories today at the Japan Sambo Championships and Russian President's Cup in Tokyo.

Competition was held at the Palace of Sports in the capital city's Sumida area.

It was the 45th staging of the event with the competition named for Russian President Vladimir Putin, the Honorary President of the International Sambo Federation.

All of the winners will now have the opportunity to represent Japan at international competitions.

In men's action, Kota Yamamoto won at 52 kilograms with Baba Genki successful at 57kg and Yuta Ishikawa the winner at 62kg.

The 82kg crown went to Akitoshi Naito with the 90kg winner declared as Kikuyo Kikuchi.

Kusumoto Yoshiko won at 48kg, Miki Yoshida triumphed at 52kg, Fukutetsu came out on top at 68kg and
Takahashi Rui was the top sambist at 80kg.